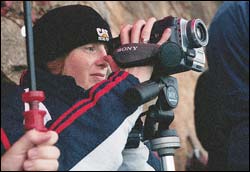 Dr Michele Boddington and her digital video camera have become features of the UCT rugby sidelines this year.

So, for example, the postdoctoral fellow from the UCT/MRC Research Unit for Exercise Science and Sports Medicine (ESSM) was bunkered down under an umbrella and a swathe of warm clothing, diligently recording the rainswept UCT/Villagers page-turner on June 5. The footage from that match was then added to the database of segments that Boddington is compiling and passing on to the UCT rugby club.

Boddington's recordings have become a part of the UCT game plan since first team manager John le Roux approached Professor Tim Noakes, director of ESSM, for help. Although not a professional outfit (it's a student sport, after all), the UCT club - and first team specifically - was eager to be professional in their approach to the game and wanted to see what sports science had to offer the side, says Le Roux.

"The game of rugby has become more sophisticated - on the intellectual side and the analysis side."

Boddington's contribution is to record the side's games and edit the video into digestible chunks that, per the instructions of the UCT coaches, concentrate on specific elements of a match, such as lineouts, rucks or other set pieces. The most recent request from the club, for example, was for Boddington to splice together footage on the side's scrums over six or seven matches of 2004.

Recording a match - rather than detailed analysis - may only be an entry-level service, but it serves a very important need for both coach and player, says Boddington. "If athletes can see what they're doing, then they can see if they're doing it right or if they need to make changes."

How widespread the use of video analysis becomes often hinges on the relationship between sports scientist and coach, and coach and player. "The coaches know their sport and what they're trying to get from their athletes. I provide the technology for the coach, and the coach gives all the feedback to the athlete."

The sports scientist has to be careful, though, not to step on any toes. "That's where the scientists have to be intelligent and work very closely with the coaches. I could, for example, spend months analysing one game, and I could still have to coach say to me at the end of it: 'Thanks, but you've wasted my time'.

"It's very important that you listen to their game plan, and know what information they want."

Once the coach trusts the scientist and the technology, the relationship becomes a more interactive one. "After a while I can say, 'Well, coach, what about this aspect of the game?'.

"Because coaches learn that you do find valuable information, they will listen to your point."

Boddington has plenty of experience in the field - her doctoral thesis concentrated on video analysis in hockey, and she has just completed a painstaking analysis (it doubles as research paper) of the Springboks' performances at the 2003 Rugby World Cup. The SA side's proclivity to score fewer points and to concede more - compared to Australia, England and New Zealand - in the second half of their games were among the observations she's included in this text.

As valuable as the service may be, few South African national teams have adopted video analysis - in contrast with the English and Welsh rugby sides that have entire IT labs as part of their backroom set-up. That reluctance among South African sports could, however, be a question of funding, Boddington points out.

The UCT rugby side, on the other hand, would love to make even better use of the technology. Finding the time in their brief sessions with players-cum-students is the main hitch, notes Le Roux.

But the match footage has already proven very useful for the coaching staff. Forwards coach Derek van den Berg has, for example, picked up some very interesting things about his props.

Boddington's offerings have even been used for inspirational leverage. Just before - three hours, in fact - the side's recent and historical intervarsity win over Maties, the coaches set up a screening of tries the side has scored this year for the players.

"We probably haven't yet taken full advantage of what [Boddington] has to offer because it's still a new thing for us," says Le Roux. "The challenge is just to get more out of it."