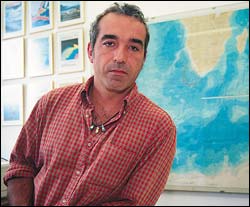 Four UCT scientists feature among the group that recently won the Stanley Jackson Award for the best published paper contributing to the atmospheric and oceanic sciences in South Africa in 2003. The win marked the first time that this award has been made to oceanographers.

This distinction is named after Professor Stanley Jackson, one of the pioneers of meteorology and climatology in South Africa. Jackson was a leading light in the field, and founded the well-known Climatology Research Group at the University of the Witwatersrand. He also played a key role in founding the South African Society for Atmospheric Sciences that now makes this award at its annual conference.

This year seven papers were nominated for the award and six independent reviewers, including three from abroad, had to make the judgement. In the end, the decision went in favour of a paper by Dr Pierre Florenchie, Professor Johann Lutjeharms, Dr Sebastien Masson, Associate Professor Chris Reason, and Dr Mathieu Rouault titled The Source of Benguela NiÃ±os in the South Atlantic Ocean. All hail from the Department of Oceanography at UCT, bar Masson, who is with the Frontier Research System for Global Change in Japan.

The Benguela NiÃ±o in the South Atlantic is a counterpart to the devastating but better known El NiÃ±o in the South Pacific, explained Lutjeharms. In normal years, the water on the west coast of Angola, Namibia and South Africa is cold and nutrient-rich, supporting a large commercial fishing industry. During anomalous years, a body of warm, nutrient-poor water sweeps southward along the coastline, with detrimental effects for fish and other marine animals.

This unusual feature - now referred to as the Benguela NiÃ±o - was first recognised by Dr Vere Shannon, now honorary professor in UCT's Department of Oceanography, although he could only surmise its origin and driving force at the time. Using a sophisticated French ocean model, it has now been demonstrated that changes in the winds in the western tropical Atlantic are the source of this disturbance to the usual flow and that these events could be predicted at least two months in advance.

In selecting the group's paper for the Stanley Jackson Award, the reviewers stressed the seminal nature of this research, the concise and well-written form in which it was presented and the importance for prediction of this event along the southern African west coast.