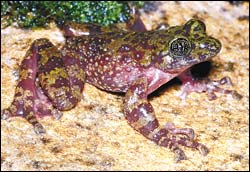 The Table Mountain Ghost Frog (Heleophryne rosei) is one the species that conservationists and herpetologists worry may soon disappear altogether as it is found in only four streams on Table Mountain.

Almost one-fifth of all known frog species in the southern African region are threatened with extinction, according to the landmark publication the Atlas and Red Data Book of the Frogs of South Africa, Lesotho and Swaziland, hatched after a nine-year incubation.

Our frog fauna, though not as abundant as neighbouring Madagascar's, is rich in relation to our land area. Launched last Thursday at the Avian Demography Unit, the Frog Atlas maps the distribution patterns of our region's 114 frog species and lists over 42 500 distribution records. It's a full conservation assessment of all species and is intended as a handbook for amphibian conservation.

And while frogs figure large in folklore, they fare far worse in conservation terms. Yet they are a critical part of the food web, both as predators and prey, and serve as sensitive indicators of environmental balance.

Almost twenty of the 114 recorded frog species are threatened. Four of these species are classified Critically Endangered, eight are Endangered and eight are Vulnerable. A further five species are Near Threatened and the status of another eight is Data Deficient because so little is known about their occurrence and life histories.

Two of the critically endangered species are found on the Cape Peninsula, one right under our noses: the Table Mountain Ghost Frog (found in only four streams on Table Mountain), and the Micro Frog, whose only remaining population on the Cape Flats is in the indigenous vegetation inside Kenilworth Racetrack.

The other two critically endangered frogs are Hewitt's Ghost Frog, which occurs only in the Elandsberg in the Eastern Cape, and the Mistbelt Moss Frog, which is restricted to the eastern escarpment of KwaZulu-Natal and the Eastern Cape. Both species have their habitats threatened by commercial forestry and invasive alien vegetation.

Also of concern is the endangered Western Leopard Toad, with breeding grounds at Zandvlei, in the path of the proposed R300 toll road (see letter alongside); and the endangered Cape Platanna, now restricted to the Cape of Good Hope Nature reserve, Betty's Bay/Kleinmond and the Agulhas National Park.

Generally, frogs prefer to breed in small, seasonal wetlands. It's the smaller, seasonal and ephemeral pans that people build on that are important. Ecologically the message is brief: frog habitats are being reduced very fast. The Blue Route, for example, was constructed on a prime breeding habitat of bufo pantherinus and contributed significantly to the decline of the species. And with unprecedented coastal development, coastal species especially, are threatened.

South Africa is very rich in terrestrial specimens. The Desert Rain Frog (Breviceps macrops) or melkpadda, for example, lives in the desert strip along the coast from Luderitz to Alexander Bay and is sustained by the coastal fog. The squat, round frog burrows in the moist sand of the unvegetated areas between the dunes. When he finds a mate, a special glue adheres them and they burrow down in the sand together to mate. In a display of filial devotion, the female stays to tend the eggs.

But the melkpadda is under threat from strip mining along this mineral-rich coast and a process is underway to proclaim the range around the river mouth at Alexander Bay a protected stretch of coast.

The atlas contains a few surprises. Some species, like the Paradise Toad (Paradys Skurwepadda), originally thought to exist in the rocky pools of the northern mountain desert region, is now known to occur over most areas of the Richtersveld and Namaqualand. Others, like Afrixalus spinifons, the Natal Leaf-folding Frog, found in KwaZulu-Natal and the Eastern Cape, was once thought to be common. It has now been listed as vulnerable due to a paucity of records.

The atlas also mentions three undescribed frogs, one of these is Poynton's Caco a red list species, status: data deficient. A single known specimen was found, curiously, in an empty beer bottle at a plant nursery near Pietermartizburg in April 1954.

Slender and small, it has a body length of 15mm and differs from other Cacosternum species in its colour and markings: a bold reticulated pattern of dark brown blotches on a yellow background, both dorsally and ventrally. Nothing more is known of this species and, sadly, it is assumed to be extinct.

The book lists some charmingly named species, like Bilbo's Rainfrog (Breviceps bagginsi), named after JRR Tolkien's famous hobbit who lived in the ground. Add to that the Strawberry Rainfrog (Breviceps acutirostris), the cryptically named Landdroskop Moss Frog (Arthroleptella landdrosia), and the sonorous-sounding Snoring Puddle Frog (Phrynobatrachus natalensis) and you have names for fictional characters to rival Beatrix Potters's creations.

The South African Frog Atlas Project (SAFAP), lead by Harrison, had the beneficial spin-off of rallying the herpetological community behind a common cause, albeit in territory occupied by bird experts. At Thursday's launch he joked that the ADU might well also stand for Amphibian Demography Unit.

Thanking all the contributors took some doing. Besides the sponsors (the main ones including the Department of Environmental Affairs and Tourism, WWF, the Madza Wildlife Fund and the Smithsonian Institution) and six co-editors, the project called on over 400 froggers to assist in the data collection.

Landowners went out of their way to assist fieldworkers, and their interest and hospitality relieved the train of long, gruelling nights in the field. "Fieldworkers seeking permission to explore a dam or vlei on a farmer's land were often hard-pressed to resist the attempting aromas and bonhomie of a braai-in-progress - and sometimes they failed!" the editors wrote in their introduction.

But the life of a fieldworker is also a vicarious existence. Paddaman Harold Braack travelled all over South African in the Paddamobile; a Mazda-sponsored bakkie, collecting data, surviving three attempted hijackings in the former Transkei. One night he found himself surrounded by gun-wielding farmers who mistook him for a livestock thief (froggers work in the dark).

In spite of the sometimes unorthodox methods and precarious data gathering sessions, that the definitive book came together is also a tribute to the camaraderie and collegial atmosphere that existed between the various researchers, as co-editor Phil Bishop said in a congratulatory message from New Zealand. Fransisco Dallmeier, director of the Smithsonian Institution, describes the atlas as "a remarkable achievement - the culmination of careful research, meticulous scholarship and unflagging enthusiasm".

But even as the last page is read, the book is not finished. It remains a work-in-progress. There were many cell grids, for example, in the Karoo, for which there was no data. "It's difficult to time the visits with the onset of rains there and this is the only time frogs emerge in dry areas," Harrison explained. "We will keep the database open and add to it."

The Frog Atlas is the second ecologically significant publication from the Avian Demography Unit's stable and joins the noted The Atlas of Southern African Birds, on the ADU's crammed bookshelves, the latter two volumes (it was that big) completed in 1997 after a marathon 11-years in the writing.

Next? The group is hoping to raise money to produce a reptile atlas. (The Frog Atlas sells for R320. To order a copy contact Sue Kuyper on 650-2423.)

The Frog Atlas is edited by Les Minter, Marius Burger, James Harrison, Harold Braack, Phil Bishop and Diane Kloepfer. The weighty tome has been published by the Smithsonian Institution in Washington in conjunction with the Avian Demography Unit. It is part of a Smithsonian Institution series, Monitoring and Assessment of Biodiversity Programme (no 9). It is the result of collaboration between the ADU and the School of Health Sciences at the University of the North, and several other universities, museums and conservation agencies around the country.