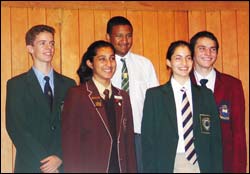 The Western Cape's top young number crunchers were recognised at a special award ceremony at the Baxter last week, with two brothers from Rondebosch Boys' High School coming out tops in the popular 2004 UCT Mathematics Competition.

Harron and Saadiq Moolla (of Rondebosch Boys' High School) were the top scorers in grades 8 and 9 respectively. Harron achieved full marks, while his brother, Saadiq, came first in his grade for the second year in a row.

A record 6 067 entrants took part in this annual competition, which took place at UCT on April 21 this year, with participants coming from 128 Western Cape schools, some as far afield as Beaufort West, Victoria West, Bredasdorp, Prince Albert, Hopefield, Paarl and Worcester.

The UCT Mathematics Competition started in 1977 as a school-based event, organised by local teachers. After three years it had grown so big that it moved onto the UCT campus. This is the 25th time that this popular event has taken place at UCT.

The papers were also sent to the Eastern Cape, Limpopo and the Northern Cape for regional competitions there.

Once again, this year's event went very smoothly, entirely due to the experienced team of teachers who help run the event.

After the excitement and impact of the competition itself, this is not the end of mathematical activity for the winners.

The top 30 students in grades 9, 10 and 11 were invited to take part in the Canadian Invitational Challenge, written 10 days ago.

UCT also invites a new intake of 40 of the top grade 8 and 9 participants into its weekly mathematical enrichment classes, the UCT Mathematical Circle.

In September this year, all the prize winners here will have an opportunity to compete for places in the teams to represent Western Province and Boland in the Inter-Provincial Mathematics Olympiad.

Also making his mark was Lindsay Hans from Kasselsvlei High School, one of the 102 "Dinaledi" schools participating in a project set up by former Education Minister Kader Asmal. Hans has been selected to represent South Africa in the Pan African Maths Olympiad. He is also first reserve for the South African team for the International Mathematical Olympiad (IMO). The Dinaledi ("Stars") schools have been singled out for special treatment in maths and science. Lindsay Hans is one of their first "stars".

Girls are as well represented as boys in the South African teams for the Pan African and International Maths Olympiad, which has a 50:50 split.