Venus will kiss the Sun's face not once but twice 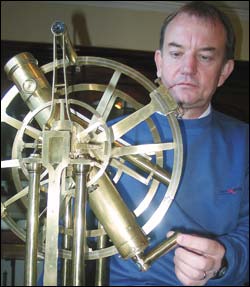 SAAO's Willie Koorts, electronic technician and amateur astronomer, with one of the brass instruments housed at the SAAO observatory. Koorts is part of the team that built the cameras that are being incorporated into the SALT telescope in Sutherland, due for completion in 2005.

It's a once-in-a-lifetime phenomenon but you have two opportunities to see the transit of a petite Venus across the vast and fiery face of the sun. The first crossing occurs on June 8 at 07h15 this year, the second on June 6, 2012, mini eclipses that occur every century or so.

These transits, which usually happen in pairs with intervals of eight years, occur when the orbits of Venus, Earth and Sun put them into alignment along the same plane. Only the inner planets Venus and Mercury transit the sun in this way, though Mercury's transits elicit less rapture, occurring regularly - 13 to 14 times each century.

The rare spectacle next week will have planet- and star-watchers around the world reaching for their telescopes and hastening to ideal vantage points. South African Astronomical Observatory electronic technician and amateur astronomer Willie Koorts will be one of them.

But Koorts has more than an astronomical interest in Venus' flirtation with the Sun. There is an historical aspect that has driven him to the history books and archives to uncover details of Wellington and Touws River links to the last Venus transit in 1882.

These mini eclipses helped earlier scientists answer one of the most pressing conundrums of their time: the exact distance between the Sun and the Earth. By bouncing radar signals off the Sun and Venus and using spacecraft measurement, experts in the 1960s measured the average Sun-to-Earth distance at 92 955 859 miles, a measure called the astronomical unit. The official metric distance of 149 597 870km was officially adopted by the International Astronomical Union in 1976.

Though transits of Venus have occurred for thousands of years, the first report of the phenomenon was in 1639, followed by sightings in 1761, 1769, 1874 and 1882. It was to view the 1769 transit from Tahiti that Cook undertook his first voyage to the South Seas.

As a child growing up in Touws River, Koorts recalls two mysterious beacons in the local hotel courtyard he used as a short cut from bioscope (local legend had it that a piece of star had fallen to earth on the spot). After marrying, he moved to Wellington and through his wife (she was a social worker at the local children's home) became immersed in the links between the town's Huguenot Seminary for girls, established by the Rev Andrew Murray, and a handful of women (they are from Venus, after all) who were influential at the time of the last transit.

In a refereed article for The Monthly Notes of the Astronomical Society of Southern Africa (Vol 62 nos 7, 8), Koorts examined local links during the last transit.

The seminary's first principal, Miss (later Dr) Abbie Park Ferguson, was a keen amateur astronomer and friend of Sir David Gill, and taught astronomy there. In 1882 the seminary acquired a six-inch Fitz refractor, set up in an observatory just in time for the transit on December 6.

Simon Newcomb, leader of the American transit expedition, and later a respected star-gazer (a crater on the moon was named after him), formed an observing station alongside the seminary and helped the school makes its own observations. He encouraged the seminary's teachers and students (all women) to take part in the observations and set them up with their own telescope. Koorts says that when the Americans departed, they left behind their instrument mounting piers.

Today, the names of Miss ME Cummings, Miss AP Ferguson and Miss JN Brown are listed among the professionals, each credited with a transit observation. The author of Builders of Huguenot even claim that the amateurs made better observations than the professionals. Newcomb's diplomatic reply to this was : " –. It was partly the result of good fortune, and partly due to the quickening of the faculties which comes with intense interest." But according to Ferguson in later writings, the women took it " – as a tribute to the greater powers of their own sex".

In his autobiography, Newcomb expressed the wish that the equipment be used again for the next transit. Sadly, by 1936 most of these relics had disappeared. Koorts is still trying to locate the Fitz refractor, but efforts are being made by the Wellington community to fulfil Newcomb's wish as far as possible for the June 8 transit.

Though two instrument piers were left in Wellington, marking the spots where the equipment had been mounted, sadly, these were forgotten. An iron post was later erected on the foundations to mark the place from which Newcomb's observations were made.

As a result, too few physical remains survived for the Wellington site to be declared a national monument. The iron post has since also disappeared. In Touws River the two concrete pillars erected by a British sighting party were incorporated in the courtyard of the former Douglas Hotel. These are the posts Koorts remembers from boyhood. These relics were declared a national monument in 1938.

Barring the discovery of an elixir of youth, Monday Paper readers won't be around to see the next transits in 2117 and 2125. So get your eclipse glasses (those with good eyesight and a clear sky should see the dark spot move across the Sun quite easily, but please protect your eyes) and head for the hills on June 8.

And although there is the 2012 transit to plan for, South Africa is badly placed (Capetonians won't see it at all). You will have to travel to a better vantage point. Voyager Miles any one?