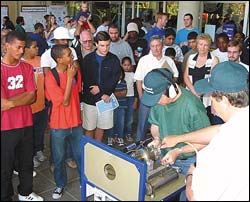 UCT once again opened its doors to the public, and this year approximately 3 500 people took advantage of the university's open day to get to know more about the institution and all it had to offer.

Iegsaan Isaacs from the admissions office said an indication of the May 8 event's success was that 2 000 application packages were handed out to grade 12 learners and 3 000 programmes were distributed to all visitors.

"This year we also arranged transport for 200 students from 17 high schools in Khayelitsha, Langa, Nyanga and Philippi. These are all students who could qualify for matric endorsements and study at university next year."

All faculties and departments participated in the event, but it was the exhibitions displayed by mechanical engineering that grabbed the attention of curious onlookers.

According to the department's Brandon Reed, mechanical engineering has a reputation of being loud and interactive and has enthralled visitors over the past years with a combination of visually appealing and attention-grabbing displays and those that allow individuals to engage with the more complex aspects of the discipline.

And this year was no different. A model jet-engine had the masses gathering well before the scheduled display times just to ensure they got a good position up front.

"The jet-engine is very loud and brings everything around it to a standstill as people focus on it," Reed explained. "Something new that we tried this year was an idea by Professor Gerald Nurick to take groups of interested people to his blast laboratory where he detonated plastic explosives to show the effect this has on steel plates.

"There was a lot of excitement generated by this rare opportunity."

Reed continued: "In line with UCT's 175 celebrations we worked hard on coming across as a team. What I think is important is that not just academic staff took part, but administrative and support staff as well. It was, without a doubt, a huge team effort."