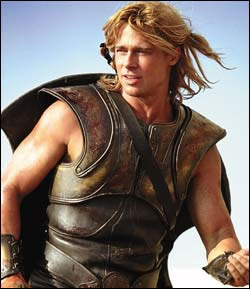 Troy, the new film "inspired by" Homer's The Iliad and directed by Wolfgang Petersen (Perfect Storm, In the Line of Fire, Das Boot), opened in cinemas last week.

A week before, we dragged David Wardle, UCT associate professor of classics - and who, unlike the Monday Paper reporter, had actually read The Iliad - along to the press screening of this epic tale of a young man's lust, a landgrubbing king, the nature of war and Brad Pitt's calves.

Wardle kindly put a few thoughts on the film together for Monday Paper - the punchy headline above is all his - which we share with you.

Greek mythology by its nature was highly fluid - one should never be surprised at the variants possible on any myth or the minor episodes within it. For over 2 500 years, there have been attempts to "improve" Homer, and Wolfgang Petersen's will not be the last.

To the viewer who knows nothing of the Homeric version, Petersen's film is a straightforward sword-and-sandals romp - a buffed Pitt (Achilles) is a rebel with a cause (himself and his posthumous glory), reluctantly pressed into the service of his liege lord Agamemnon (Brian Cox, X-2). He gets the chance to practise his classical fighting skills, augmented with the now obligatory eastern martial arts, against a variety of foes, most notably Hector (Eric Bana, Hulk and Chopper), who is just about the only good Trojan.

If there is any deeper message to the film it would seem to relate to imperialism (economic and military) - Agamemnon wants the (oil?) resources of Troy at any price. It certainly wasn't Helen's (Diane Kruger) face that launched a thousand ships. The Greeks (more blonds) are mostly honest soldiers not sharing the motivation of Agamemnon, while the Trojans (more dark-haired oriental types) worship strange eastern gods. The right side wins.

Petersen's Troy relegates the gods to the occasional oath by the human participants, and all the pathos and understanding of the nature of humanity that their role in Homer generates is lost. Perhaps a modern western audience with its monotheistic blinkers would struggle to take Homer's gods seriously, but Peterson has nothing comparable to put in their place. Since the sixth century BC Greek mythology has been rationalised for Peterson, greed, glory and lust suffice.