Another win for UCT's wildman 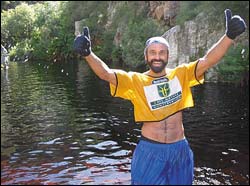 Wilderness Wildman may be the tag of an adventure race, but it's also a handy epithet for extreme athlete Jean Paul van Belle.

The UCT information systems senior lecturer was one of the winning foursome, Team Energy, the only official team to complete the recent Wilderness Wildman endurance race, set in the Swellendam environs from April 23 to 25. In a 150km-trail involving hiking, paddling and biking, the 24- to 30-hour ordeal trail took contestants to mountains, rivers and inhospitable pathways. All the other official teams had to be rerouted on a shorter course - or they simply gave up. Several competitors limped off either injured or exhausted.

Van Belle has a penchant for gruelling outdoor contests. He was part of the Team Energy that won the Eden Challenge in 2002. Among his other athletic exploits, Van Belle is a veteran of St Helena marathons and record-holder of the island's Jacob's Ladder Challenge - all 699 steps - scaling an impossibly steep gradient and said to be the longest continuous ladder in the world.

John Collins first conceived the Wilderness Wildman event in 1999. Though it originally took place in the Wilderness/George region, the organisers are not too fussed by the venue - just as long as the route is wild.

Clocking in after 22 hours 08 minutes, Van Belle's team (led by Ugene Nel) had rivals Team Adventure, breathing hard down their necks. But the latter were pulled off the Breede River only 10 minutes behind Van Belle's group because of dangerous rapids. "The night hike was a killer, the five-day Swellendam hike done in reverse," Van Belle said.

But endurance, though an essential attribute, is not the primary aim, he says. With 150km of rough terrain, navigation is an equally essential skill.