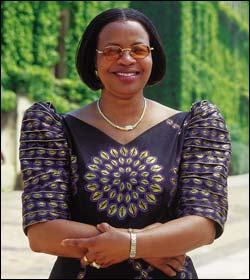 Chancellor GraÃ§a Machel has challenged members of the UCT community to renew their commitment to society by helping to raise R175-million to put needy students through university.

She called on the community to give effect to transformation, human resource development and social responsiveness by taking up the Chancellor's Challenge 175 - a quest to raise R175-million over the next five years.

Half of every rand raised for the Chancellor's Challenge 175 will go to the UCT undesignated endowment fund, securing financial stability for the university. The other half of each rand raised will see a cohort of 175 students, called the Chancellor's Scholars, studying for three years in the various faculties. These Chancellor's Scholars will receive the financial aid on the condition that they, in turn, become donors to the next generation of students - whatever the amount - when they have left UCT.

The chancellor said that as South Africa's oldest university, UCT had a legacy to pass on to future generations.

"My wish is that each person go home tonight with a clearer vision of what that legacy should comprise and that from this occasion onward, every member of the UCT community will, with renewed vigour, commit their support to this outstanding institution."

His son, Dr Pallo Jordan, the new Minister of Arts and Culture, was the guest of honour, along with several other dignitaries and friends of UCT.

Dr AC Jordan was born on October 30, 1906, in a tiny village, Mbokotwana, to the Nobadula family of the Zengele clan, in the Tsolo district of the Eastern Cape. He is remembered as a professor, author, scholar, writer, linguist, literary critic, poet, musician, humanist, cricket player, nationalist, freedom fighter, revolutionary, Christian and gentleman.

He obtained his PhD at UCT in 1957 with his thesis on the phonological and grammatical study of literary Xhosa, and spent the bulk of his teaching career at UCT where he served as a lecturer from 1946-1962. He was an outspoken critic of apartheid and in 1961 won the Carnegie Travel Grant to tour universities in the US but was refused a passport.

He later crossed the border illegally to Botswana and went on to become a professor in the Department of African Languages at the University of Wisconsin-Madison where he died in 1968.

Despite his untimely death, Jordan had a prolific academic and literary career. As a pioneer in Bantu languages and literature, he wrote much of his creative work in Xhosa, his mother tongue. He authored several articles and manuscripts. His most famous work is Ingqumbo yeMinyanya (The Wrath of the Ancestors), which was published by Lovedale Press in 1940. He later translated it into English.

A selection, but not comprehensive list, of pioneers included Harold Cressy, the first black student to graduate with a BA degree in 1910; Zainunissa "Cissy" Gool, a tireless social campaigner and the first black woman to graduate with a master's degree in 1933, as well as UCT's three Nobel laureates: Dr Aaron Klug, the late Professor Allan MacLeod Cormack, and Emeritus Professor JM Coetzee.

UCT has its origins in the founding of the South African College in 1829, hence the 175th anniversary. The college was a boys' school, which also provided some atertiary education. While a small number of black students were first admitted to UCT in the 1920s to selected faculties, the number of black students remained relatively low until the 1980s and 1990s.

UCT's transformation can be seen in the 2004 student body where almost half of UCT's 20 000 students are black and just under a half are women, making this one of the most diverse campuses in South Africa.