Universe mappers take a closer look at Zone of Avoidance 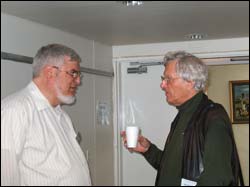 Cosmographers map the universe on its largest possible scale. Recently 40 of these specialists collected at UCT's Graduate School of Business for a conference titled Large-Scales Structures and the Zone of Avoidance (a reference to the band of the Milky Way). The conference was organised by the university's own cosmographers, Professor Tony Fairall and Patrick Woudt, assisted by their long-time collaborator, Renee Kraan-Korteweg of Mexico.

The week-long gathering was best remembered for the collegial atmosphere, says Fairall.

"It was an appropriate time to hold the meeting, with the Southern African Large Telescope (SALT) soon to become operational. Many of the delegates travelled to the Karoo straight after the meeting to visit that facility."

Among those attending were some of the foremost thinkers in the field, including delegates from Australia, Russia, Japan, the US, Europe, Canada and Mexico. Among the luminaries were Brent Tully (Institute for Astronomy, Hawaii), who has mapped the distribution of many nearby galaxies and whose Tully-Fisher relation forms a prime tool of many current investigations. John Huchra (Harvard Smithsonian Center) was also among the stellar group and described by Fairall as one who "has probably aimed a telescope at, and recorded, the spectra of more galaxies than anyone else alive".

Ofer Lahav came from London, a leading theoretician whose efforts have helped locate the local overdensity known as the Great Attractor, that is at least partly responsible for our own galaxy and neighbours, moving at 600km per second towards it. Jaan Einasto (Estonia) was the first person to claim that the large-scale distribution of galaxies had a cellular structure, something that seemed highly improbable when he announced it in 1977, Fairall says, but which was later confirmed.

"Few galaxies are found in the Zone of Avoidance," the UCT cosmographer explained. "More accurately, it is a 'Zone of Obscuration', where our own galaxy in the foreground hides the large-scale structures formed by distant galaxies."

Part of the conference was devoted to studies that seek to overcome this barrier. "Deep optical, infrared and neutral hydrogen (radio) observations are rapidly filling in the missing pieces, some of which - such as the Great Attractor region - are crucial in their local influence."

The conference was supported by UCT, the South African Astronomical Observatory and the National Research Foundation.