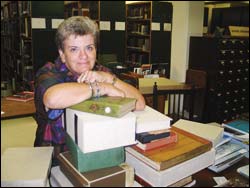 Curator of rare collections, Tanya Barben. "I love the work I do." The Rare Books and Special Collections library contains among its gems incunabula, or books published in the first 50 years of printing. (The web address is: www.lib.uct.ac.za/rarebooks.)

Beyond the heavy metal gate, way down in the Rare Books and Special Collections section of the main library the air is dry and cool. At this level you have left behind the knots of students, the racks of volumes and well-thumbed journals. Here is another world - climate controlled, a sanctuary for the university's most valuable books. It is treasure trove where the pocket-sized bibliophile Tanya Barben holds sway.

"I'm a round peg in a round hole," Barben says of her work. She lifts the prized books from their linen solander boxes, displaying them as a jeweller would rare stones on a velvet cloth.

First up among Barben's treasures are examples from the collection of over 170 books decorated with fore edge art. She proffers Thomas Moore's Poetical Works, fanning the pages. As if by magic a painted scene appears. The painting is invisible with the book closed. It is an art dating way back, one that became popular in England in the 18th and 19th centuries. The types of books commonly painted were Bibles, prayer books, volumes of poetry, classics and travel books.

"Before the book is bound, the text block is sewn together and the edges of the pages fixed with egg white and water. Afterwards the painting is coated again with the same mix and gilded," Barben explains. "It was very much an English tradition and later, in the early 19th century, these artists were women working in sweatshop conditions."

Next among the books is an especially rare piece, a 1535 Dutch Bible from Antwerp, one of the oldest vernacular Bibles in South Africa. It was printed by "heretic" Jacob van Liesvelt and dates from the time of the Reformation in Europe when Spanish Netherlands (now Belgium) was a Catholic country. Van Liesvelt's Bibles carried an annotation encouraging direct audience with God, rather than through the intercession of priests and others. For this, Van Liesvelt was burnt at the stake, his property confiscated and all copies of the Bibles torched. A similar fate met those caught in possession of the texts.

There are many volumes that provide tantalising glimpses of lost traditions and insight into the past. In the collection is a copy of Curtis' Botanical Magazine, dating from the 18th century. Published in 1788, it is a bound collection - though incomplete - of journals detailing Cape plants, exquisitely hand-coloured engravings of Cape flora before alien invasion.

"These rare books chronicle the intellectual and cultural development through the ages and throughout the world, the celebration of the role of history and the dissemination of knowledge," Barben notes, extracting one of her favourites: a rare copy of Thomas Paine's The Rights of Man, in two volumes.

"Paine was a remarkable political thinker whose ideas can be found in the US Bill of Rights," Barben explained. Initially censored in England for its scandalously progressive democratic ideals (he was a proponent of rights for women and animals), the first volume has no cover and the title page of the library's copy is stained and worn from the many passages from hand to hand.

Equally fascinating is the mysteriously titled The Tailor's Cutting Room Guide, a painstakingly illustrated book on the dress of Victorian gentlemen, complete with patterns for smoking jackets, riding outfits, clothes for the theatre ...

From this we turn to John Gerarde's weighty antiquity The Herball or General Historie of Plantes, the famous illustrated study in which botanists' illustrations are recorded in miniscule detail.

There are also children's works, like the fantasy of William Timlin's The Ship that Sailed to Mars, with its whimsical pen and ink illustrations. An immigrant from England to South Africa in 1912, Timlin is perhaps better known as the "architect of Kimberley". He used his artistic skills to illustrate magazines and books. In 1923 The Ship that Sailed to Mars, his best-known book, was published in Britain, the paintings most notable for their expression of a mixture of science fiction and fantasy. Only 2 000 were produced initially and it was reprinted in 1993.

From another box she lifts an original set of Dickens' Pickwick Papers, serialised in monthly parts, with great foresight by the author.

She disappears between the racks to find Giovanni Bolero's Le Relationi Universali, which she describes as a "kind of travelogue". Published in 1618 in Venice, it contains, curiously, illustrations composed 120 years previously. But most remarkable is that the book includes the first image captured of a Khoi family in Plettenburg Bay.

The collection's oldest book is Facta et dicta memorabilia of Valerius Maximus, dating from 1471. The copy in Barben's hands was printed by Joachim Furst and Peter Schoeffer, who took over Guttenburg's press.

Beyond the main section is the Kipling Room, a quiet space for scholars to retreat, and housing the world-renowned Kipling collection, donated to the library in the 1950s by John Scott Ivan MacGregor, a retired teacher, ex-Potchefstroom Boys' High.

"This collections contains books by and about Kipling," Barben says. It's a busy place, venue of many lectures and seminars, popular among students.

Few know that Kipling's first published work is titled Departmental Ditties and Other Verses. He was not yet 21 and working as a journalist in Lahore, India, when he penned it. The slender book was addressed to "all Heads of Department and all Anglo Indians", and made up to resemble an official document. It is composed of "clever rhymes" and he described it as a brown baby with a pink string around its stomach.

The valuable books are not on loan, but there are four loan collections in the department, including the Willis Naval and Aeronautical Collection, covering all aspects of the development of aerial warfare in the 20th century, and the Speculative Fiction (science fiction and fantasy writings) collection, the core donated by the students' Tolkien Society in the mid 1990s. Add to this the eclectic Jack Maclean Memorial Collection. A tea and coffee importer in Cape Town in the 1960s, Maclean's personal book collection of "hunting, shooting and fishing" and other gentlemanly pursuits, was bequeathed to UCT on his death. The fourth is a collection of books on the study and recreational aspects of speleology, the study of caves and caving.

Every once in a while the university makes funds available to buy "remarkable books", like Lyndi Sales book Egypt. Barben opens it reverently. "It is a wonderful example of book art. She did much of her research for the book in this department," she adds.

There have been many notable visitors to this section of the library. But it is the students who Barben recalls with affection. Like the vaguely eccentric undergraduate who, with boyish wonder, frequented the department, sifting through all things nautical and aeronautical. He graduated as an accountant. Today he rides horses for relaxation in Rotten Row. We speculate for a moment. Perhaps he is assembling a vast fortune and will buy old books, which he will donate to UCT.

Elbow deep in precious books, Barben confesses she has difficulty reading contemporary works. "There is nothing really in modern writing that satisfies my soul." Her forays are presently confined to non-fiction, works like Bill Bryson's A Short History of Nearly Everything. She has read "bits and pieces" from all over the collection. "Librarians tend to dip into things," she says wryly.

With 33 years at UCT, she has moved about the libraries, from what is now African Studies to the Law Library. She took her present post in 1991. Barben traces her love of books to childhood when she turned to them during long spells of convalescence - as well as a father who read to her.

The buzzer signals another visitor, another student. Too much time has gone by. The rare books are replaced in their solander boxes.. Though difficult to find, this section of the library is constantly busy. It is also a place to step out of time and rhythm. Down here there are only two questions that need to be answered. Where to begin? Where to end?