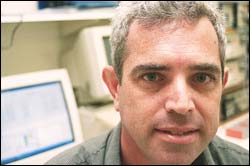 Learning new tricks: Biochemist Dr Malcolm Collins, based with ESSM, has recently been promoted to scientific specialist by the MRC.

Dr Malcolm Collins is something of a late bloomer - even by 1998, with a postdoc already in the bag, the biochemist-cum-molecular biologist had never given any thought to a career in sports science.

But towards the end of that telling year, he landed a post as senior scientist with the Medical Research Council (MRC), which then assigned him to what is now known as the MRC/UCT Research Unit for Exercise Science and Sports Science, or ESSM (pronounced "ESS-uhm"). And if working with sports physicians, dieticians, physiotherapists and biokineticists is not what he had imagined he would end up doing, Collins has, as he indicates, fallen in love with the science and the close-knit unit.

This enthusiasm for his work probably has much to do with why his paymasters at the MRC recently promoted him to specialist scientist. Another has to do with the contribution he brings to the field. ESSM's sole biochemist/molecular biologist for much of the past five to six years, Collins has worked hand-in-hand with his colleagues at ESSM and the Sports Science Institute of South Africa (SSISA), where much of the unit is based, on a wad of projects. This includes research on muscle damage among endurance athletes, tendon pathology and the genetic predisposition to athletic excellence.

Regardless of the project, Collins has aided his colleagues by being able to dig a little beyond where they could go - all the way to the cellular level. "I've been involved at the biochemical and molecular biological level," he explains, "basically looking at what happens inside the cell, at the proteins or even the DNA."

So, for example, working with Associate Professor Mike Lambert, director of the Discovery Health High Performance Centre at the SSISA, and neuroscientist Associate Professor Alan St Clair Gibson on premature muscle aging among endurance athletes, Collins scrutinised how these athletes were exhausting their plentiful-but-limited stash of satellite cells, responsible for the regeneration of damaged muscle cells after exercise. He has also, in a vanguard project with doctoral student George Makone, identified a number of genetic elements that may predispose some people to tendon pathology.

It is collaborations of these kinds, where he gets to team up with authorities from other fields, that keep the creative juices flowing, Collins finds. At ESSM, much of that, he admits, has to do with proximity.

"In the sciences, as much as they don't want to admit it, a lot of people work in isolation. Whereas here, we're able to tackle problems from a multi-disciplinary approach - the physicians, physiotherapists, biokineticists, dieticians, exercise scientists and biochemists/molecular biologists, are all in the same unit in the same building."

ESSM's location in the SSISA - with its gym and smorgasbord of sports and health services - also means that whatever answers to scientific teasers the team comes up with, get some very practical outlets via the institute's work with elite and recreational athletes, and other communities.

"Tim [Professor Tim Noakes, ESSM's director] has been really good at asking what the important questions, the relevant questions, are for sports people and the country," says Collins. "Using the combined expertise here, the scientists in the labs are able to answer - or try to answer - these questions, and that information is then fed by our more applied colleagues to the athletes."

This marriage of skills, of theory and practice, is the scientific hotbed that he - even before sports science became an option - long hankered to work in, Collins notes.

"This," he emphasises, "working in this kind of multi-disciplinary environment, is exactly what I always wanted to do."