New gene discovery offers light at the end of the tunnel 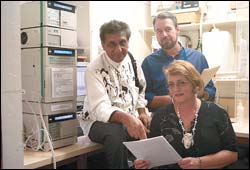 Seventy-two year-old John Foster discovered he had sight problems as a young man in the 1950s. By the time he was diagnosed with retinitis pigmentosa at the age of 32, he already had a family of five, two of whom inherited the degenerative impairment. But a UCT team of human geneticists have spearheaded the identification of the gene responsible for the form of retinitis pigmentosa (RP) in Foster's family, paving the way for new forms of therapy.

Regional spokesperson for Retina South Africa in KwaZulu-Natal, Foster says the discovery will provide hope for the thousands who suffer from this form of advancing blindness. Now in their 40s, the disease has had a profound effect on his two affected children. One is an artist, the other an aeronautical engineer. Neither has driven a car in 10 years.

"The effect is catastrophic. It manifests itself in loss of night vision and then gradually the peripheral vision starts to deteriorate and then one ends up with tunnel-like vision," Foster added. He has five grandchildren in their teens, who may also be affected, and needing to make decisions about future careers. "I am convinced they will find something in life, yet for me. If I'm treatable, then they will be treatable."

After studying five large South African families with the disorder, the UCT group, which includes co-principals Professor Raj Ramesar, director of the MRC Human Genetics Research Unit, and Associate Professor Jacquie Greenberg, has identified a specific gene for the locus, known as RP17. (The team y had previously localised two novel genes for retinitis pigmentosa.) To date about 150 genes (out of a complement of 35 000) have been linked to inherited retinal disease, suggesting the complex biology underlying retinal function and disease.

"By identifying the genes responsible, the affected families with inherited forms of blindness could be provided with better genetic management and will be able to track developments and even participate in research towards highly specialised future therapies for this subgroup of the disorder," said Ramesar, who also heads UCT's Division of Human Genetics.

Dr George Rebello, who coordinated the UCT group's findings, said the development was particularly promising. "The gene, carbonic anhydrase IV (CA4), is an exciting find because, unlike most other genes found in the retinal degenerative diseases, it may be amenable to manipulation, plus therapy." The gene hunt led to the unearthing of a gene that, although known, had not been implicated in human disease before. (The gene is expressed in the kidney, lens and choriocapillaris, the vascular bed supporting the retina.)

Ramesar said the identification of the gene and genetic defect in the UCT laboratory had been complemented by excellent cell biological research in the laboratory of Dr William Sly at the EA Doisy Department of Biochemistry at the Saint Louis University School of Medicine in the US. The latter group, which included Drs Guiseppe Bonapace, Abdul Waheed and Gul Shah, quantified the compromise of the CA4 protein function and collaborated with the UCT group on the latest RP17 research, recently published in the prestigious Proceedings of the National Academy of Sciences in the US. Further evidence in support of CA4 as the gene for RP17 comes from its independent identification by Dr Kang Zhang at the University of Utah.

Because of the high level of heterogeneity (the same disease being caused by any one of several genes), the team says it is likely that a single mode of therapy will not be useful for all cases of RP.

"For this reason there is pressure to identify the underlying disease genes and genetic defects in as many South African families as possible," Ramesar added. "Such families, who are 'genetically characterised', will be most eligible for personalised therapies that rely on genetic information and which are being investigated internationally."

Already successful animal clinical trials for a form of childhood retinal disease, Leber Congenital Amaurosis, are in the process of being translated to therapy for humans.

Ramesar said that a major thrust of the UCT group's current endeavour is to identify the genetic basis of the most profound forms of the inherited disease in South Africans, usually with the earliest onset and sometimes linked to hearing impairment.

Importantly, the UCT group is one of the first in the world to develop protocols and ethical guidelines for imparting predictive genetic information emanating from the research.

The division is also involved in valuable research into the heritable factors underlying bipolar disease and cardiovascular and neuromuscular diseases. The group's research on familial colorectal cancers has led to its translation into the clinical environment, where the information is being used for predictive testing aimed at reducing morbidity and mortality. In addition, this research has led to clinical trials becoming available to those subjects known to be predisposed to diseases.

The UCT retinal research group is funded by Retina South Africa, the MRC and Technology and Human Resources for Industries Programme (THRIP), while Sly's group is backed by the National Institutes of Health in the US.