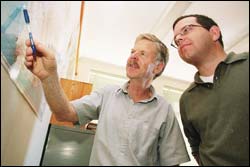 Professor Zvi Ben-Avraham, an Israeli geophysicist who has been running groundbreaking research projects at UCT for nigh on 15 years, has been awarded his country highest scientific honours.

Ben-Avraham, the Max Sonnenberg professor of marine geoscience in the UCT Department of Geological Sciences (he visits here a couple of times a year) and professor of geophysics at the University of Tel Aviv, received the Israeli Prize in Earth Sciences for 2003, presented to him by, among others, President Moshe Katzav and Prime Minister Ariel Sharon last year. He was the first person to pick up the earth sciences accolade since the 1950s.

The Israel Prize was as much a bouquet for Ben-Avraham's scientific work on continents drifting apart - his oeuvre includes research on several continental margins and rifts - as for his ability to bring people from diverse scientific backgrounds together. He has, notwithstanding a strained political climate, initiated a stream of still-thriving collaborations with Palestinian and Jordanian peers over the years, in part because the countries have so many geophysical features in common.

Similarly, Ben-Avraham believes that there are ties beyond his UCT posting that bind him to South Africa - the countries are on the respective ends of the great Syrian-African Rift, which runs from northern Syria, passes along all of Israel, through the Dead Sea, the Red Sea and the east African rift, and ends somewhere near KwaZulu-Natal, he explains. "So we are somehow connected."

Cape Town and its surrounding geophysical features also offer rich pickings for nosy researchers, Ben-Avraham argues. "From a tectonic and geological point of view, this area is very unique, and very little is known about it.

"So everything you touch is, in a sense, new." 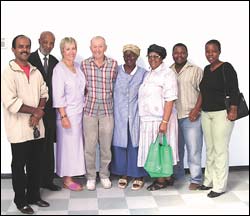 SHAWCO's Varkey George (left) with Brendalyn and Ernest Stempel (third and fourth from left) and guests at the new facility.

The Ernest and Brendalyn Stempel Foundation gave SHAWCO another R300 000 for the Adult Day Care Club in Nyanga.

This comes two years after they donated R300 000 to refurbish the new site for the day care club for the older and disabled residents in the community.

The building was recently handed to SHAWCO, just as the Stempels were visiting Cape Town.

The money donated by the foundation will be used for the running costs of the club.

An exhibition of paintings by Jenny Parsons is on at the Irma Stern until April 24. Oil on Canvas is Parsons' first solo show in Cape Town.

The painter graduated from the Natal Technikon where she studied under artists such as Virginia McKenny, Jeff Chandler and Jeremy Wafer. She has taught and lectured extensively, including stints at the Community Arts Project, the Ruth Prowse School of Art and the Natal Technikon. She has painted fulltime for the past three years.

Parsons has taken part in numerous exhibitions throughout South Africa, and her work is represented in a number of collections. She is also a founding member of the Boudoir Biscuits, a Cape Town group of woman painters, with whom she has collaborated on various projects.

Parsons is a contemporary landscape painter whose paintings are an intuitive response to Cape Town, where she lives and works. Influenced by artists such as Bonnard and Diebenkorn, her work has an authentic voice and is a very personal interpretation of her environment. Expressive use of paint and colour together with compositional structure evoke landscapes that are at once real and imagined.

The GSB is launching a novel course next month that promises to give adults at all career levels another chance to master a fundamental but elusive competency: mathematics.

Maths is a pitfall competency for countless adults in South Africa who experience failure and confusion in trying to make the world of numbers add up. The result is that they often feel inadequate and incompetent in both their careers and private lives.

Kathy Lewis, director of Executive and Management Education at the GSB, said that the ability to feel comfortable with numbers is a crucial skill for people at all levels in business, but that many people had negative experiences at school that have left them with high levels of anxiety in dealing with numbers and feelings of insecurity when relating to their work colleagues in case they are "found out".

The ten-hour evening course, aptly titled Second Chance Maths and which runs from April 28-29, allows participants to explore the roots of their fear through writing and role-play. It is designed so that no knowledge beyond basic grade seven mathematics is needed.

The course will be run by Chris Breen, associate professor in the UCT Department of Education, who is well-known on the Cape Town scene for his innovative approach to mathematics learning. Breen's approach is effective because, instead of being forced to rely on memory, participants will be encouraged to develop their powers of visualisation as a tool for exploring the world.

The course has also been designed with maximum accessibility in mind. "This is a unique opportunity for people to overcome a long-term fear. All the barriers have been lowered - the course is run during the evening and at an extremely competitive rate," said Lewis.

A number of companies took part in the annual UCT Careers Fair held on March 31 in the Molly Blackburn Hall on upper campus.

An occasion for organisations to market themselves and scout talent, the exhibition is the first part of the UCT graduate recruitment programme. The fair gives students the opportunity to explore different employment prospects by researching, asking questions and networking.

Some of the companies who participated in this year's event included Shell SA, Deloitte & Touche and, for the first time, SA Breweries.

"Attend e-mail training and you could win a prize"

Do you remember the above words? Read further to see if you are one of the lucky winners.

The Email@UCT Project came to an end in December 2003 after converting well over 5 000 accounts. At the time, staff members were encouraged to attend training courses to see how the new e-mail system was set up and to learn how to use either Netscape Messenger or Outlook Express - the two e-mail packages supported on campus.

We know how important it is that people feel empowered and not threatened by new software, which is why we promoted the training courses. Training also ensures that there is a shorter learning curve, allowing you to get back up to speed more quickly.

Over the period of the project, between two and six seminars per week were presented at a venue closest to staff members' offices. Our aim was to take the training right to each individual to encourage participation in the courses.

Another incentive was the "mystery prize draw". Trainees completed attendance slips, which served a dual purpose: a critique of the training course itself and an entry into the competition. The draw was held at ICTS and Karen Muller drew the names from the competition box.

These are the lucky prize winners:

Congratulations! You will be contacted by e-mail or telephone so that we can arrange for you to collect your prize.