Science meets art in the click of a shutter 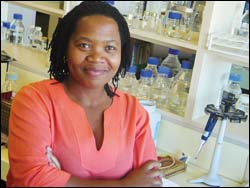 Working deep within the microscopic layers of mammalian tissue, researchers are privy to a world of startling form and structure. But few will ever have the opportunity to witness the metamorphoses of cells as they divide and multiply, spawning the miniscule and enigmatic details of life forms. It's at this level that three UCT doctoral researchers and a senior lecturer brought science and art together in visuals that took three of the four main prizes at the 2003 SA Science Lens Photographic Competition.

The human biology department in particular, came up trumps, taking honours in two of these categories.

PhD student Thandi Mgwebi won the Science Close-up Award for her composition Apples of My Eyeball, while PhD student Edward Nyatia and his supervisor, Dr Dirk Lang, received an award in the biotechnology division for their highly commended entry Mammalian Astrocyte Cell.

But the coup belonged to doctoral student Anton Pauw (botany) who won overall honours with his composition The Spectre and the Spectrum, submitted in the Science in Action division.

The competition was open to images depicting any aspects of science, engineering and technology. The previous competition fielded 160 entries, expanding to 284 in this round.

The competition provides a unique and useful forum for the creative specialists who illustrate and communicate the wonder and impact of science on everyday life, and is a joint programme by the Mail & Guardian and the South African Agency for Science and Technology Advancement, an NRF business unit.

Mgwebi's colourful image visually documents the developmental stages of a mouse embryo's eye. With a master's in aquatic resource management from the University of Transkei, Mgwebi became interested in cancer research. In HOD Professor Sue Kidson's eye research group she is investigating a mouse model of glaucoma, looking at the development of the cornea, specifically the innermost lining, the delicate single cellular corneal endothelium.

"I'm not a photographer at all," she explains, fielding questions on subject and technique. But the extraordinary visuals of the eye tissue development were irresistibly striking.

It was up in the cell biology laboratory in the Anatomy Building that she carefully dissected and processed embryonic mouse eyes, separating corneas from lenses at various stages of mouse development - each of the "apples" in her picture represents lenses attached to the retina at each of these embryonic development time-points.

The composite pictures she took to create her winning picture were taken using scanning electron microscopy, miniscule details captured on the microscope at the Electron Microscope Unit.

As the original image was a rather stark black and white, Mgwebi dipped into her own palette to bring the forms to vivid relief, using ubiquitous computer tools.

The R15 000 prize handed out by the judges in Johannesburg is most welcome, she says, adding that she has won other competitions. There was the best poster presentation award she collected at an International Developmental Biology Conference at the University of Wisconsin in the United States in 2002, as well as last year's best speaker award from the Experimental Biology Group, a postgraduate forum also involving the universities of the Western Cape and Stellenbosch.

But her photograph is the most striking of all, creating a tiny window into the enigmas of a hidden creation.

Eyeballing: The eye of a mouse embryo. The purple section represents the corneal cup. The orange, yellow and green sections represent the lenses with the retina attached at different stages of development.