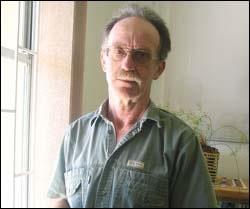 UCT academics have shuffled notes and scraped feet with some mightily impressive guests on conference podia around the world. But few can recount rubbing shoulders with the likes of HRM Prince Charles.

Project administrator of the Avian Demography Unit's seabirds project, John Cooper has been requested to present the closing plenary lecture at the Waterbirds Around the World Conference from April 3 to 7 at the Heriot-Watt University in Edinburgh, immediately before Prince Charles performs the closing ceremony to the close-on 500 delegates.

ADU director Professor Les Underhill has been the chair of the Scientific and Programme Committee for the past couple of years (Underhill presented a paper in Paris last Wednesday and a talk in London on Thursday evening before travelling to Edinburgh.)

Cooper's last slot was a special request from the conference organisers. His topic concerns the migration patterns and conservation of albatrosses and petrels of the Southern Ocean. HRM is a keen conservationist and his passion for albatrosses is well known. So he is likely to be a keenly attentive listener.

"Southern albatrosses and petrels face a number of threats, both at sea and on land, that have led to them being accorded an international Red Data status by the World Conservation Union," Cooper said. "The albatross family probably has more formally threatened species than any other multi-species bird family."

The global distribution of albatrosses and the larger petrels is also skewed to the southern hemisphere and particularly the Southern Ocean. "They no longer occur as breeding species in the North Atlantic and only three species breed north of the Equator in the Pacific Ocean," Cooper added. "This may be the reason that they are less familiar to specialists on waterbirds; the centres of occurrence and study for ducks and breeding waders are both in the northern hemisphere."

The most significant threat comes from long-line fishing, which kills thousands of albatrosses and petrels every year.

"Led by Australia, we are an excited by the recent introduction of the Agreement on the Conservation of Albatrosses and Petrels (ACAP), developed as part of the Convention on Migratory Species (including South Africa) stable of agreements. ACAP now has 11 signatories with five having ratified the agreement. All the southern breeding states have signed the agreement but to date only one 'fishing nation' has done so."

As there are strict protocols in place with a royal on the podium, the ADU group have been told they can't take their own photos with 'PC' (as HRM has been dubbed for security reasons, in the wake of the Madrid bombing and the far-reaching shadow cast by Al-Qaeda), Cooper said he hoped to have the approved photographer take a pic or two for the ADU album back home.

As the Duke of Rothsay when he visits Scotland, the matter of appropriate dress was discussed. Would HRM wear a kilt? Cooper will exchange his working garb (cotton shirt and pants) for a suit. "And fortunately I have a good collection of silk ties from my days as advisor to Kader Asmal," he quips.

Some even have penguins on them.