Buoyant Boyes is a Five-Star Staffer 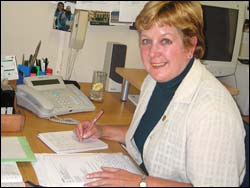 "Jenny Boyes has run a superlative office for two DVCs for well over a decade. Apart from this she has been absolutely superb at dealing with the wide diversity of people who interact with this office," their nomination reads. "She is completely at home interacting with students, workers, staff, parents or visiting dignitaries. Whatever their condition in life and whether they are pleased or angry, disaffected or troubled in some way, she treats all with the same touch, winning their respect and admiration. She never loses her cool, nor her good humour, and through this has defused many tense situations. She is an extraordinarily supportive and hard-working member of staff, who has very quietly made a major impact on the university."

Boyes is no stranger to life at the top. She worked in the vice-chancellor's office for 18 years after a stint at the University of Durban/Natal's school of architecture.

"It has been a fantastic learning curve."

Boyes' effervescence is noticeable. Keeping office for a DVC with a varied and wide portfolio has its moments, especially as he is often called on to act as VC. What keeps her cool and optimistic? "I think it's my training and work ethic inherited from 'the old days'". Her private secretary's diploma included business, and even deportment. "Can you believe it?" she quipped. "How things have changed!"

Back then PAs were taught to leave personal problems at home and get on with the task at work. They also learnt the value of good manners and a smile. "It takes so little effort to be pleasant."

She admits she has been lucky with both her bosses. "They have been highly organised." She particularly admires West's crisis management. "He doesn't lose control. He's also independent and lets me get on with things."

With so much on the go, the challenge is to keep her mind focused. She likens West's diary to a dental appointment book, crammed full, with some crises needing urgent attention. "One slip and it's a disaster. There is just no space for error."

Boyes prefers an early start to her day. By 07h20 she's at her post, sifting through e-mails and bringing order to her desk and diary.

There are times when the office resembles something like Grand Central Station; people queuing, phones ringing – To cope with the frenetic pace, Boyes escapes after hours, mainly to walk on the beach and in the forest (though she is mourning the passing of her trusty 15-year old walking companion, Jackaroodle, a cross between a French poodle and a Jack Russell).

She's also partial to meeting buddies for coffee, "to catch up and relax" and is an aficionado of coffee shops. She will tell you the best cafÃ© latte is to be had at the Woolies coffee shop.

There are other plusses to living life at the top, especially when her boss held the international portfolio. A stream of VIPs crossed her threshold during this time, including Nelson Mandela. Among her treasures is a photograph of herself in a group with Madiba.