A meeting of two worlds 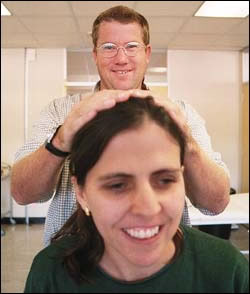 The healing touch: Assoc Prof Alan St Clair Gibson, here with doctoral student Liane de Azevedo, believes that alternative approaches to science may offer many clues as to how the brain works.

Associate Professor Alan St Clair Gibson is adamant that any scientist worth his lab coat -steeped in an orthodoxy of pipettes and thermometers and antibiotics or not - has to keep an open mind.

Which is why, any stray misgivings in check, the UCT sports- and neuroscientist accepted an invitation to speak at and take part in a demonstration at the Natural Medicine Symposium in Stellenbosch, bringing together some 500 medical experts and alternative healers, in late March.

Here St Clair Gibson was to run a small test with the gathering's main attraction, bioenergetics healer Zeev Kolman, touted by organisers as one of the world's most gifted practitioners.

Kolman claims to have cured everything from skin rashes to cancer by the simple art of touch, projecting his bioenergetic force or "life force" through his hands into the patient's energy field so as to correct the "imbalance" causing the disease. His curriculum vitae records that he's worked with everyone from Joe Public to Hollywood demigods - Barbara Streisand and Goldie Hawn feature on his list of former patients - and even the occasional blue-blood.

For his slot, St Clair Gibson talked delegates through some of the research conducted on the workings of the brain at the MRC/UCT Research Unit for Exercise Science and Sports Medicine (ESSM), based in part at the Sports Science Institute of South Africa (SSISA) in Newlands, and also ran a trial with Kolman and a new machine designed by New Yorker Masahiro Kahata. Kahata's invention - of which the ESSM plans to purchase two sometime soon - consists of two electrodes that are placed on the skull, and which then project images of real-time brain activity onto a computer screen. The machine, says St Clair Gibson, is ideal for research with athletes as it is far more compact than some of its bulkier and pricier counterparts.

At the symposium, Kolman demonstrated some elementary bioenergetics on a volunteer rigged up to Kahata's electrodes and monitor. The moment Kolman started moving his hands around the "patient", she immediately fell into a state of relaxation, as witnessed on the screen by the presence of alpha brain waves that are produced during relaxation, reports St Clair Gibson.

The test neither endorses nor gainsays - that wasn't its purpose - Kolman's claim to healing powers, insists St Clair Gibson. But his verifiable skill to, at the very least, induce a state of relaxation in another person by touch is of profound interest to the ESSM.

St Clair Gibson, along with Professor Tim Noakes, Professor Vicki Lambert and a host of colleagues and students at the ESSM, are forging a model of fatigue that they call a "central governor theory". This theory flies in the face of the more in-vogue school of thought that holds that it is the muscles that determine fatigue, that exhausted limbs send signals to the brain to instruct the athlete to either slow down, or call it a day and go grab a shower.

But a couple of gaps in this doxy have the ESSM convinced that scientists have put the cart before the horse. They are arguing, instead, that it is the brain that, in a ruse to protect itself and the rest of the body, triggers a series of sensations that tell athletes that they're exhausted, even when there's a little something left in the tank.

It's a brave new world for the scientists at the ESSM - they're surrounded by naysayers - and they're just beginning to cobble their theory together. But they're willing to listen to and explore every possible avenue of research - even ones presented by New Age gurus - which can fit into their big theory.

Kolman's tactile approach is, if not exactly old hat, then neither cutting edge, says St Clair Gibson. It's been scientifically proven, for example, that one person touching another - a doctor a patient, an even-keeled person a distressed colleague - has rather remarkable physiological affects. "If I were to put my hand on you, your heart rate will probably go into synch with mine, and our brains' EEG [electroencephalogram] waves will start synching as well."

That exchange of energy between two people is what intrigues St Clair Gibson and his colleagues. "We want to look at the energy sources of different people, and how and why these affect the brain waves and their heart rates."

Answers to these questions will have broad applications at the ESSM (and elsewhere), be it for the treatment of kids with Attention Deficit Hyperactivity Disorders (ADHD) who, it is thought, may have too much information going into their brains, or with athletes who could be trained to relax (rather than have jumpy coaches egging them on).

He may be taking some ribbing at the moment - he got a mention in a You magazine article on Kolman - but Gibson and his colleagues have no objections to courting alternative approaches and proponents. In a recent article in Mail & Guardian, Noakes too pointed out that, as his colleagues begin to scout the mysteries of the subconscious, they are coming to terms with the fact that Western science may not hold all the answers.

"There have been no great breakthroughs in the study of the brain - since ever," says St Clair Gibson. "And people are starting to realise that maybe it's time to approach it from a different perspective.

"If the risk is that we'll look silly, then I'm willing to look silly if it means I can find something new. You're not a scientist if you're not willing to try new things."