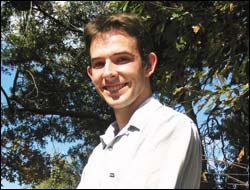 If you'd asked a young Johan Hanekom what he wanted to be when he grew up, the chances are he might have said: "The president".

A second-year business science student, he still has great aspirations, not necessarily bound up in eminence or power but in ensuring South African youth has their say in the world's highest planning and strategising bodies.

In February, the UCT student and member of the Commerce Students' Council was selected to represent South Africa on the Global Youth Parliament.

The body works out of Rome and is headed by ambassador Uri Savir, former Israeli chief negotiator of the Oslo Accords and currently director of the Peres Centre for Peace in Tel-Aviv. It's a prestigious fraternity where Hanekom will get to rub shoulders with the world's young leaders as well as mayors, ministers and others who directly influence public policy affecting the world's youth.

"The GYP was established to act as a global vehicle for youth empowerment through which the world's future leaders can come together and help develop and shape policies that will improve children's lives across the world in the next two decades," he explained.

As South Africa's representative on the GYP, Hanekom will act as a facilitator for increasing communication between government and young South Africans. "Now there is someone in South Africa that young people, NGOs and government can contact to promote the ideals of social upliftment and development via the parliament."

Concomitant with his selection comes the responsibility of launching a social development project that will be evaluated by the World Bank in 2006.

As a GYP member, Johan has had to develop an Urban Agenda for 2020, outlining his vision for South Africa and Africa over the next two decades, an exercise that would have had most economists and strategists scratching their heads.

The document required him to analyse how he would reach his goals, and over the next three years the Smuts student will link up with governmental bodies to implement these projects as a GYP member. These will focus mainly on sustainable development through the promotion of entrepreneurial thinking and education among youth.

Business is his main passion (as his course suggests), notably the entrepreneurship that must drive the country and provide livelihoods for its future adults. He believes restructuring the entrepreneurial sector will be vital if South Africa is to become a global player.

"Some say Africa is shaped like a crocodile, with the tail the strongest part. South Africa forms that tail," he explained. "And we're going to need it, especially if President Thabo Mbeki is touting South Africa to lead the African Renaissance."

The flame was lit early. "There was a lot of peer pressure at school to find you niche quickly, whether sport or academics - mine was business."

As a grade 10 pupil at Paul Roos in Stellenbosch, he signed up for the Sanlam Business Club and was pinpointed as a future business leader.

At first it was "cookies and stuff" at school market day until he started his own business club, eventually with heavyweights like Clem Sunter as guest speakers.

He's smart but modest (he was reluctant to talk about his straight-A matric, qualifying the achievement with: "I didn't have 12 extra subjects or anything").

And although trenchant about his plans, the Isaac Ockberg Scholarship winner doesn't easily fit the mould suggested by his schooling. For example, he did not see Stellenbosch University as a natural choice for study.

Despite his formidable workload, balance is important to him and Hanekom has left room for "adventure and fun".

"I don't want to skip the other stages of my life. You lose out on other education along the way," he says sagely.

Indefatigable and venturesome, one might expect him to leap from planes (he's written about extreme sports for magazines). But he confesses he's partial to a bit of turf under his feet and enjoys Kimura Shukokai karate.

Beyond the GYP selection, his sights are set on the more immediate future - an MPhil in development studies at Oxford and then the World Bank - or even the United Nations," he said.

"It's all about finding your north star."