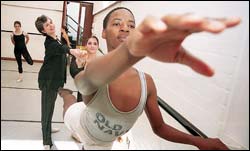 This year UCT's School of Dance pirouettes and pliÃ©s its way into the history books as it celebrates its seventieth birthday.

Established in 1934 by the late Dr Dulcie Howes, the UCT Ballet School (as it was then known) became the first ballet school in the world to be attached to a university.

It was also at this time that Howes founded the UCT Ballet Company, which consisted of students from the school dancing in the corps de ballet, with staff members and professional dancers performing the leading roles.

According to Professor Elizabeth Triegaardt, who has been director of the school since 1986, it is this long association between company, school and university which has contributed to the group's longevity.

"There are very few ballet schools in the world that can boast a 70-year existence. Being attached to the university from its inception elevated the school's status. It became a place where everyone wanted to study dance."

The school's success can also be attributed to the fact that it is one of only two institutions in the country that offers instruction in three dance forms, namely classical, contemporary and African.

"In 1987 we introduced the discipline of contemporary dance and in 1997, African dance, so it was therefore no longer appropriate to refer to the 'ballet school'. We subsequently changed the name to the School of Dance to reflect the incorporation of these styles," explained Triegaardt. With the establishment in South Africa in 1963 of the four Performing Arts Councils and their attendant companies, such as the 60-strong CAPAB Ballet, an era of plenty was born.

This period saw unlimited funding being made available for lavish productions on the Nico Malan Opera House (now Artscape) stages as well as occasional large-scale tours to venues such as the Settlers' Monument Theatre in Grahamstown, the Civic Theatre in Johannesburg and the Port Elizabeth Opera House.

But in 1994 notice was given that all funding from government would cease and that all performing companies should, by 1997, become independent of their parent bodies. Under Triegaardt's leadership, CAPAB consequently became a non-profit organisation and is now known as the Cape Town City Ballet (CTCB).

Triegaardt spearheaded the transformation of the company until earlier this year when she resigned from her post as executive chairman. She remains, however, the executive director of the board.

Triegaardt believes that having a dance company attached to the school benefits all students. "In most of the CTCB productions, 75% of the dancers are from UCT. It's a system that allows us to feed ballet dancers into the company and offer them employment opportunities.

"It also provides role models and gives the students something to aspire to and work towards," she added. "They see where they can end up if they work really hard and what it's like to work for a professional company."

With her ballet dancer's pulchritude, Triegaardt admits that her dream is to establish a centre for dance - a dance company attached to UCT that would allow students to gain performance experience, not only in the ballet field but also in African and contemporary dance areas. "There are two cottages next to the school that should be flattened. This would solve a lot of our space problems. At the moment we have one lecture room to accommodate all our students and trying to co-ordinate the timetable is one of the biggest challenges of my job.

"Most of our staff don't have offices and they were only recently given computers. Due to the fact that our equipment needs are not that great, we would need only about R15-million to set up a dance centre. It's something I have to do before I retire."

And if Triegaardt's previous achievements are anything to go by, there is no reason that a UCT centre for dance should not become a reality.

After all it was Triegaardt who, in 1997, ensured that the school's diploma course be accepted as a degree, making it the first university degree programme in dance to be recognised in South Africa. This required aligning academic subjects in the dance programme with courses offered on upper campus - a task her predecessors had been unable to realise.

"It's not enough to be just a dancer anymore," said Triegaardt. "You need to be versatile in dance disciplines and have computer and business skills. That's why we constantly need to re-examine our curriculum to make sure we give our students what they need to succeed out there."

Triegaardt was born in Pretoria and matriculated from Hyde Park High in Johannesburg. She graduated from UCT with a BSc (majoring in mathematics) in 1966. In 1967 she joined CAPAB, working as a principal dancer and ballet mistress until her retirement in 1990.

She received the Nederburg prize for her contribution to ballet and for her role of the Lilac Fairy in Sleeping Beauty. In 2003 she received an award from the premier of the Western Cape for meritorious service to the arts in the province.

In keeping with CTCB's 70th anniversary theme for 2004, the company will be presenting Celebration at the Artscape Theatre from May 1-15. To honour South Africa's 10th year of democracy, Triegaardt has commissioned well-known South African choreographer Adele Blank to write a contemporary work that will aptly reflect South African dance and its people's diversity. Music for this piece, titled Syzygy, has been recorded by the talented South African band, Tumi and the Volume.