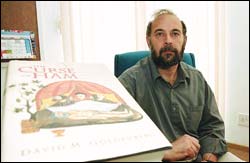 Race and religion: Visiting Professor David Goldenberg has some fascinating things to say on the relations between blacks and whites in the formative years of the world's three major religions in his new book.

Sometime in the early 1990s, David Goldenberg learned that his next-door neighbour at the Annenberg Research Institute for Near Eastern and Judaic Studies (later incorporated into the University of Pennsylvania in Philadelphia), noted Islamic scholar Bernard Lewis, was writing a book on race and slavery in the Middle East, investigating issues around race, slavery and the representation of black Africans in early Islam.

Goldenberg was familiar with similar works on blacks in classical times - by the likes of Frank Snowden and Lloyd Thompson - and knew that there were even a few articles around on blacks in early Christianity. Nothing of consequence, however, had been put on paper on early Judaism's encounter with black people.

Until December last year when, just about 13 years after that telling conversation with Lewis, Goldenberg and Princeton University Press released The Curse of Ham: Race and Slavery in Early Judaism, Christianity and Islam. The book has been garlanded with praise in the US, Professor David Brion Davis of Yale University, for one, lauding the work as "a masterpiece".

In South Africa, where it has just been released, The Curse of Ham now shares its name with a second-year course that Goldenberg is running at UCT as the Isidore and Theresa Cohen visiting professor of Jewish religion and thought this semester. Goldenberg also leads an honours module on the same topic.

And The Curse of Ham offers students plenty to mull over.

Goldenberg's starting block is the Genesis 9 story of the brazen Ham who dared to look at his naked father, Noah, lying in a drunken torpor in a tent. In contrast, Ham's brothers Shem and Japheth decorously avert their eyes, even when covering their father. When Noah later hears of Ham's slight, he curses Ham's son Canaan to slavery - for all time, some say.

While the Genesis story does not mention skin colour, Ham has been represented as a black person in retellings and art (a deduction Goldenberg disagrees with in his book). For example, in an illustration of the story taken from a 15th century Castilian translation of and commentary on the Bible (the painting adorns the cover of The Curse of Ham), Ham is unmistakably Negroid - his skin darker than his two siblings', his lips fuller and his hair curlier.

More crucially, says Goldenberg, this passage from the Bible has been adopted as pillar for the belief that God cursed all black Africans to eternal slavery. "In antebellum America, for instance, that belief was the single greatest justification for maintaining black slavery, and for keeping that social order in place for centuries."

In The Curse of Ham, Goldenberg sets about "deconstructing the racialisation" of Noah's reproof. "I wanted to show not only that that is an incorrect reading of the biblical text, which is fairly easy to do, but also to trace how that reading became embedded in western civilisation - how it happened, when it happened, where it happened and why it happened," he says.

To do so, Goldenberg combed texts of biblical and Rabbinic Judaism up to the eighth century, early Christian works of the first seven centuries, and writings from the beginnings of Islam. He was on the lookout for clues to the images that whites had of blacks, to see "what white people saw when they looked at black people".

One thing they saw, he found, was the personification of sin.

In early Christianity - and to a lesser extent in other faiths as well - black Africans served as a metaphor for sin, Goldenberg observes. When the Christian fathers read of a black person - notably Ethiopians, the descendants of Ham - in the Bible, the text was interpreted allegorically as hinting at sin or sinfulness, says Goldenberg. "This interpretation derives from the role blackness plays in colour symbolism," he notes.

This equation of blacks with sinfulness persisted for centuries.

"I think it's now time to look at this and other issues," says Goldenberg, "and see what role these representations of black people played in later western perceptions of blacks."

Goldenberg and his students in the department of religious studies will be thrashing out ideas on the theme until mid-June. By then, the scholar will also have decided whether or not to make his move to Cape Town a more permanent one.

He has to, however, weigh up a couple of things, notably the needs of his family (still in the US) and his own scholarly ones, as the library at UCT currently holds only a handful of works on his particular province of interest. Scenic Cape Town - which may eclipse in beauty even his hometown of Vancouver in Canada, he says - and South Africa, in general, are major plusses, however.

"I've spent 13 years looking at the relations between blacks and whites in the ancient world," he explains. "But coming to the new South Africa, I found these very questions still in the air, and being discussed all the time.