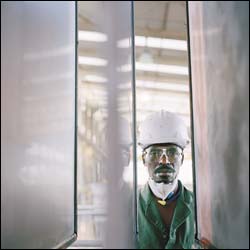 Shooting gallery: One of the photographs shot by UCT alumnus Graeme Williams, to grace the new building.

Because he lives and labours in Johannesburg these days, Graeme Williams will not be at the opening of the new chemical engineering building this week, but tenants and callers will be hard-pressed to overlook the mark the UCT alumnus is leaving on the structure.

Williams' exhibition of 50 photographic portraitures of mine- and process-plant workers, Hard Ground, adorns - as it will do for years - the inside of the Department of Chemical Engineering's new home. It also marks a homecoming of sorts for the Cape-born photographer.

Although he enjoyed his studies, he says, Williams' real passion was photography - he had, after all, been snapping pictures since he was 12. And so, after graduation and with his "proper" qualification respectfully mothballed, he decided to pursue his true calling.

He moved to London, doing photographic work - in various capacities - on a couple of magazines for a year, but returned to South Africa in 1988 and settled in Johannesburg. Working for Reuters, he was able to record Nelson Mandela's release in 1990, and the subsequent transition to democracy and ANC rule.

Williams continued to freelance for Reuters until 1993, when he started concentrating on his personal interests - there have been numerous local and international exhibitions and two books - and corporate work. He remains a regular contributor to The New York Times, The Telegraph and Leadership Magazine, and has also done umpteen shoots for mining houses.

The latter served him well, he believes, when he made his successful bid for the chemical engineering artwork tender. His idea - and final project - involved photographing the people who toil daily in the rugged surrounds of mines and engineering plants. This was something of an about-turn for Williams, who on previous mining projects has had to fix his lens mostly on machines and objects. The environment would this time serve as backdrop only.

In a throwback to early techniques, Williams packed a Hasselblad 6x6-cm camera and, over a three-month period, shot off countless rolls of film on sites in Gauteng, Mpumalanga and the Northern Cape. "I wanted to mirror the conventional approach used by studio photographers in the early days of mining. The film emulsions and lenses were slow in those days and subjects were forced to keep still for long periods of time while the image imprinted itself on the film."

Shooting under low-lighting conditions, Williams would take his pictures using what light was available. This often meant that he had to ask his subjects to remain motionless - no blinking - for a second or two.

"They're quite formal sorts of portraits," he says of the result, "but because of the almost other-worldliness of their harsh environments, the shots became more interesting. They have a real kind of edge to them. But I hope they also reflect a level of pride that these people have in their work."

Hard Ground also allowed Williams to invest plenty of himself in the task, possibly more than he did on previous mining shoots. "What was really different and made the project appealing to me was that I was able to make it my project.

"I could really get involved and photograph it in a way that I really wanted to."