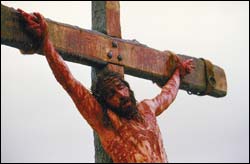 By the bucket: The violence of The Passion of Christ has inspired some, rankled others

Be sure of one thing - the bloodstained and oh-so-talked-about The Passion of the Christ is not the kind of film that those who see it (and many of those who won't) are likely to be indifferent to.

But hate it or adore it, sneer at it or trumpet it as the greatest celluloid adaptation of the life and Passion of Jesus Christ, there can be little doubt that The Passion - depicting the arrest, trial, crucifixion and blink-and-you'll-miss-it resurrection - is undeniably . . . mesmeric.

Ask religious studies professor Jim Cochrane. Cochrane's immediate reaction to the movie was that of antipathy - the closest thing to a snuff movie, he called it - but the theologian and religion scholar owned later that the film and its images not only disturbed his waking moments, but also, that night, his dreams.

"Blood - blood everywhere," is how he summarised the film after a night of fitful sleep. And impassioned remarks like these have become de rigueur when talking or writing about the movie. Although, unlike Cochrane, not all commentators have been disparaging. Much has been made, for example, of the approval (albeit guarded) that Gibson's film has received from the Vatican, and the fervour with which it has been embraced by the so-called happy clappers and Bible Belters.

But others, too, have been complimentary, and "powerful" has become the stock adjective in the hail of kudos. "It's tough not to describe without using the word 'powerful'," explained one commentator. "This is the most powerful, important and by far the most graphic interpretation of Christ's final hours ever put on film," raved Richard Roeper, one half of the two-thumbs-up (or down) television pair, Ebert and Roeper.

The ever-sober Rolling Stone too, even while walking the middle ground, had to concede to the film's merits. "The Passion of the Christ is powerfully moving," wrote the magazine's Peter Travers, "and fanatically obtuse in equal doses."

There was more than one teary-eyed patron at the press screening, and interviews held by radio station KFM immediately after the show would suggest that many found it, indeed, powerful. Not so Suzanne Woodward of the UCT Centre for Film and Media Studies, who did not mince her words in knocking the film. "I thought it was absolutely awful," she remarked over a post-screening coffee. "Utterly and laughably so at some points," she added.

"From a purely technical point of view, it was amateur and there were so many cheap tricks - the shroud collapsing at the end like a cheap soufflÃ©. I had to laugh."

With her Anglican upbringing, Woodward had anticipated that the film would have some emotional resonance. "It had none," she said.

"It is a high contender for one of the worst films I've ever seen."

Cochrane, too, was disappointed. "I expected to be hit emotionally much more than I was - I was left surprisingly unaffected."

Professor Milton Shain had other reasons for wanting to see the film. He had been involved in a running exchange of thoughts in the Cape Times, in which he held that the movie threatened to "rupture a carefully nurtured rapprochement between Jews and Christians constructed over decades by the Vatican and other Christian denominations in the wake of the Holocaust".

Since news first broke that Gibson was working on the film, there have been worries among Jewish organisations that the director might resurrect dated notions that Jews were collectively - and eternally - responsible for Jesus' death, an indictment found in the gospel of Matthew, the (ostensibly, some would say) primary source for The Passion. According to the Matthew 27:25, the crowd baying for Jesus' crucifixion calls out - as one - to Pontius Pilate to "Let the responsibility for his death fall on us and our children" (Good News Bible).

In its Declaration on the Relation to the Church to Non-Christian Religions of 1965, the Catholic Church's Second Vatican Council stated that no longer would Jews, as a people, be blamed for the death of Jesus. Much has been made of the fact, however, that Gibson, a devout Catholic, rejects the decisions of the Second Vatican Council, even though he has repeatedly said that neither he nor his film is anti-Semitic.

Of concern to Jews, however, were the Holocaust-denying statements by Gibson's father, a biblical scholar, and the director's refusal to, publicly at least, disagree with or contradict his father. Although the line from Matthew remains in the film, Gibson did agree to cut the English subtitle for it (the film is in Latin and Aramaic, as well as a smattering of Hebrew).

After the screening, Shain was, if not placated, less perturbed. "I was not offended - not in-your-face," he said. "I didn't think the caricatures of the priests and the Jewish high court were as bad as I had read. It wasn't as bad as some commentators have made out."

Associate Professor Richard Mendelsohn, also Jewish, agreed. "I was unmoved. I didn't feel particularly offended, and I don't think the anti-Semitic stereotyping was quite as bad as I expected."

One concern, however, is that the offending line from Matthew will be subtitled when the film is released in the non-English speaking countries, noted Mendelsohn.

He and Shain also point to the way in which the priests are portrayed as doughtily unrepentant (two who object to the trial are manhandled out of the film). In contrast, some of the Romans soldiers - who beat and torture Jesus for much of the film - are moved to repentance. Even Pilate, whom history records as sadistic and murderous (so much so that Caesar at one stage recalled him to Rome), is whitewashed into a thoughtful man unwilling to put Jesus to death. The Jewish priests are, therefore, clearly cast as the piece's bad guys.

The sanitised Pilate is but one of the "inventions" Mendelsohn and his historical studies colleague, Professor Vivian Bickford-Smith, highlight. "In many ways, when translating, into film, a written text, or indeed a text where there is little evidence to work with, it demands that a filmmaker embark on a whole lot of invention," said Bickford-Smith.

Gibson, of course, did not so much invent as rely heavily on some Catholic Church-approved extra-Biblical sources, notably the diaries of mystic nuns Mary of Agreda and, in great chunks, Sister Anne Emmerich. Emmerich's doleful The Dolorous Passion of Our Lord Jesus Christ, in which her visions of the Passion are recorded, documents Satan tempting Jesus in the Garden of Gethsemane, Jesus' mother and Mary Magdalene mopping up his blood after the scourging, as well as drawn out conversations between Pilate and his wife. These events, although in the film, are not found anywhere in the Bible (Pilate's wife gets a brief mention).

Cochrane sees Emmerich as Gibson's true inspiration, much more so than the gospels. "Emmerich's text is, in detail, the film," he says. "Emmerich's tortured soul is the interpretive framework."

Emmerich is also Gibson's muse for much of the film's violence, the pummelling and flaying of Christ captured in lurid, painstaking detail in her diary, even describing the sticks and whips used to beat and whip Jesus.

"A gore-fest," is how Mendelsohn described the film.

Guy Willoughby, too, was taken aback by the blood-spilling, but thought that the film had a few things going for it. "I thought it a very powerful film - very visceral and, in an ideological sense, gut-wrenching," he said. "You could question whether it ultimately becomes overwhelming and whether you feel that you are simply in a gore-fest, and that it all becomes too much.

"But then, on the other hand, the essence of the story of the Passion is a sense of violence continuing beyond the point of making sense. And I think that's something you carry with you as you watch."

Cochrane disagrees. He argues - and many on the panel concurred - that the film harks back to an outdated understanding of Christianity. "It is a 14th century Passion Play in a 21st century cinema," Shain offered.

"I think it represents a particularly sadistic view of the Christian understanding of the Passion," said Cochrane. "It's comes from very conservative, very narrow, very violent, very retributive, punishment-oriented tradition, which is not necessarily the dominant tradition. It fits to a strongly conservative, wrathful Christianity - expressed in the so-called 'satisfaction theory' of atonement - in which God must have justice for our sins, meaning blood. And if not ours, then his own in buckets. Blood, blood, blood . . ."

The Passion of the Christ, Cochrane noted (with some passion), is not the kind of film he would recommend, least of all because it could trouble cinemagoers' sleep. Reception to the film, he and the rest of the group feel, depends much on the "baggage" viewers take with them into the cinema.

"This movie has no genuinely redemptive character," he said, "which is not to say it won't hit guilt-ridden, tormented, hurting people. It supports a kind of Christianity we don't need."