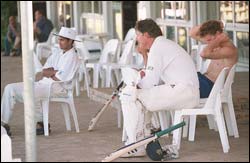 All dressed up: Although the grizzled Brian McMillan didn't get to swing the willow, his inclusion in the UCT side for its match-up against Midmar Bellville seemed to have inspired his younger teammates..

At age 40, Brian McMillan may be considered by some to be a little too long in the tooth to be playing competitive cricket with and against players half his age.

But the WP and South African cricketing giant - he's a big man, after all - was recently drafted into the UCT first side for its crucial clash against Midmar Bellville after three team regulars were called up for duty with the Western Province B squad. UCT needs to win both of its final two two-dayers (which includes the Midmar tie) for a chance to clinch the league championship, although their fate still lies in the hands of log-leaders Almar, who need to draw or lose at least one of their climactic two matches for UCT to retain the title.

McMillan, UCT coaching sidekick to former Zimbabwe international Brian Murphy, and a few second team players were selected for the Midmar match to fill the boots of the team's missing stars. And although Big Mac kept a low profile - he bowled only four overs (he figures he can still push the ball through at a brisk 127km/h) and didn't get to bat - his presence on the field may have been inspirational.

UCT skittled Midmar out for a modest first-innings tally of 144, with bowlers Wesley Morrick (4/30) and Tanner Rock (3/25) doing most of the damage. The side then chalked up a whirlwind 151 for 5, Andrew Cronje (62) and John Geoghegan (41) top scoring, which allowed the side time enough to bowl a few late overs at the Midmar batters.

The tactic paid rich dividends, and by stumps UCT had their Bellville rivals reeling at seven for two.

Almar, in the meantime, seemed on line to overrun Claremont in their clash. Almar scored 252/5 in their first innings before knocking Claremont over for a paltry 95. By the end of the first day's play, the Claremont side was on 15 for one in its enforced follow-on innings.