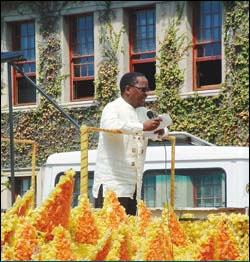 Universities, like churches, were among those institutions that survived the passage and challenge of time, said vice-chancellor Professor Njabulo Ndebele during his speech to mark the official launch to staff and students of UCT's 175th anniversary. He said it was the community's collective responsibility to ensure that UCT not only survived but thrived in the next 175 years. He stressed the importance of using the event to celebrate the pioneers and many people who had built UCT, and reflecting on those parts of the institution's history that were painful. This is an abridged version of his speech.

"It is indeed my very great pleasure and privilege to welcome you all here today at the information session about our planned activities around UCT's 175th anniversary year.

"Today I wanted to share with you our thoughts around celebrating the year, but also our thoughts about finding space to reflect on issues we are proud of from UCT's past and issues we might not be proud of.

"I want to shape in your minds the outline of the activities planned and most importantly, I want to invite you to feed back to us any ideas you might have on how we can ensure a memorable year.

"In a sense, the 175-year reflections are larger than the current UCT community, just as the 10-year anniversary of our country is more than just those gathered at a specific celebration. "These moments of reflection are deeply embedded in the past - staff and students from even 100 years ago (our ancestors) are in essence called upon when we commemorate.

"Likewise, the children of the next generation - even those not yet born and their children - are present. This moment of reflection, and our decisions about what we continue and what we discontinue, will shape the institution and will set it on a path that will influence future generations long after our departure.

"Today, I would like to suggest that this enterprise - the University of Cape Town - is like a fine red wine. It has all the necessary elements - sugar, yeast and cultivars and, blended with time, it has become, in the eyes of many around the world, a good vintage.

"We have come a long way since October 1, 175 years ago, when UCT's forerunner, the South African College, was officially inaugurated as a private high school for boys. Back then, classes commenced with three lecturers and 115 students. Compare that to our 20 000-strong student body of today, and the myriad of teaching encounters that happen on a daily basis on our campuses.

"The elements shaping UCT are diverse and multiple and I believe this contributes to our special and extraordinary end product. Throughout 175 years secretaries and scientists, lab technicians and line managers; historians and HR practitioners, cleaners and gardeners, A-rated scientists and student leaders – all have made their contribution to, in one way or another, chisel at the shape we find now when we say: the University of Cape Town.

"Our history has been shaped by many a pioneer and as we walk on campus their names grace many of the buildings and open spaces. During this year, it would be appropriate to stop a moment and remember who those pioneers were, what contributions they made and what they symbolise. Our campus is strewn with symbolic shapes, names and signs. It is important that we reflect on these, polish them, confirm their importance, change where we feel the need, and always be sure that we are shaping an institution where all must find a home - the generations from whom we have inherited this institution, the present generation of staff and students, and those following after us.

"It is important as we reflect and celebrate to find that integral balance. So, I invite you to walk the campus and reflect on the symbols you see, the colours, the names, the signs and the people and celebrate the richness.

"Beattie, for example, is not just a building. Sir John Carruthers Beattie was UCT's first vice-chancellor after the university was formally constituted by parliament in 1918. He served until 1938, and it was during this time that coloured students were accepted into the university as a matter of course. Even though Beattie came in for criticism from both the English-speaking community and Afrikaner Nationalists for adopting this policy, he stood firm in his resolve to open the doors of learning.

"Leo Marquard is not just the name of a residence. In 1924 the National Union of South African Students (NUSAS) was founded by Leo Marquard. NUSAS, as you know, became an outspoken opponent of the apartheid government and many of its leaders were harassed and detained by the security police. This student organization has had a long and proud tradition at this institution. "And Cissy Gool is not just a plaza. In 1933, Zainunissa 'Cissy' Gool became the first black woman to graduate from UCT with a master's degree. She got into trouble for allowing Nkosi Sikelele to be sung on campus, many years before it became our national anthem. In 1954 Cissy Gool was 'named' under the Suppression of Communism Act. A tireless campaigner against social injustice and racism, she was detained in terms of the state of emergency at the age of 63 and held in solitary confinement. She died three years later at the age of 66.

"There are many examples of people like these who have passed through the doors of this institution, pioneers, and we are proud to remember them.

"We are proud to celebrate this institution, but also brave and honest enough to admit the shortcomings. Thus, I call on you to think not only of our achievements, but also those elements of our history that are cause for regret.

"Although UCT was traditionally the home of the left and those active in the struggle, it cannot claim to be a place where certain people have always felt comfortable. Just two years ago, for instance, the Faculty of Health Sciences accepted a charter that acknowledged this uncomfortable past.

"It is a fact that black medical students were prevented from entering white wards, were not allowed to be present at case presentations of white patients, or even at post mortems of white bodies, and were excluded from the social life of the university.

"Acknowledging this fact at a reconciliation process in a special faculty assembly in May 2002, was the start of the healing process.

"Similarly, although UCT is proud of the fact that it was among the first institutions to admit women into its ranks, the reality is that up until the early 1980s, the majority of graduates from this institution were men.

"It is also true that the prevailing institutional culture did not always take cognisance of differences, be these in sexual preferences, disabilities, gender or colour. Many did not, and might still not, feel at ease at UCT. Likewise, we did not always choose to focus our research interests on the continent of Africa.

"The theme for the 175th-year celebrations and reflections is 'continuities and discontinuities'. We want to stand still for a moment to consider what we gather to take along on our trip into the future and what we need to shake off.

"There will be many opportunities during the course of this year to reflect on a complex past, and also what our role in the future should be. I invite you to become part of these opportunities and to help shape this institution - it is a collective responsibility.

"We plan an opening ceremony on May 7. We will honour the pioneers of the past 175 years and we will set a course for the next 175 years. Other events in the pipeline include a debating series to encourage discussion between prominent South African and African academics about our role, both locally and internationally.

"We will have a public lecture series and a staff photographic competition to capture 'Life at UCT'. Indeed, our celebrations will culminate with a 175 festival in early October, the anniversary of this institution's founding date. The festival will include a staff function and I invite you to give your ideas on how we should do this to the Department of Communication and Development. Let DCD know what you think*.

"As you all know, this anniversary coincides with another significant date - that of the 10th anniversary of democratic change in South Africa.

"This moment and this continent asks of us, its citizens, to play a particular role. If Africa's renaissance is to be a reality, participation and actual contribution to overcome the challenges we face are non-negotiables.

"We are called upon to contribute and it is my wish that the UCT of 50 and 100 years hence will one day commemorate a generation of staff and students (us) and their view, I hope, will be that we took up the challenge, that we adopted each other, supported one another (staff and student, academic and PASS member, old and young) and that we made an absolute difference.

"I invite you to be part of this important year. Thank you."

(* Your ideas can be forwarded to Skye Grove at sgrove@bremner.uct.ac.za.)