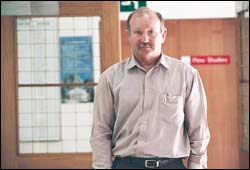 Scholarship, leadership, motivation, nurturing. These are words that turn up frequently in interviews with UCT's newest A-rated researcher, Professor Kit Vaughan. They underpin his accomplishments as a cutting-edge researcher in human locomotion, mentor to a new generation of South African biomedical engineers and as an entrepreneur in the medical field.

Returning to Cape Town in mid-January from a year's sabbatical at University College Dublin, the news of his rating has been a fitting welcome home.

It capped a testing 22-month season for the former head of UCT's interdisciplinary human biology department. First, there were the rigours of a DVC selection process in 2002 (Vaughan was one of five candidates for three posts) soon after which he was lured to Ireland by a prestigious Ernest Walton Fellowship, having eased out some tough international competition to secure the prize in its inaugural year. (An Irish academic, Walton, together with John Cockcroft, split the atom and shared a Nobel prize for physics in 1951.)

The A rating secures Vaughan's stature among leading biomedical engineers and places him in the firmament of researchers who are unequivocally recognised by their peers as leading international scholars in their field, both for the high quality and impact of their recent research outputs.

It has been a long haul; the application was submitted in February 2003 and a year of waiting ensued. "I perhaps should have earned an A-rating for patience," he quipped. But Vaughan is clearly chuffed to be one of only five engineers in the country with the prestigious ranking, a step forward for biomedical engineering, he believes.

The PhD graduate from the University of Iowa (1980, with distinctions in all 20 courses) is also quick to temper jubilation with gratitude, paying tribute to a wider group - his students, colleagues and mentors.

"The A rating is both a celebration for me and those who work with me, my research group, my department, faculty and of course, UCT, and a humbling experience," he told Monday Paper. "In the latter case I feel extraordinarily privileged to have reached the level of recognition by previous UCT academics such as John Martin who was a mentor and role model for me."

It was as a young NRF P-rated researcher (under-35 and with the potential to establish themselves) that the academic first staked his claim in 1984. And, as DVC Professor Cheryl de la Rey remarked, the NRF had it exactly right. Having been rigorously assessed by a panel that included six of Vaughan's peers abroad, he has fulfilled that promise.

With a belief in nurturing people, he has taken others along in the process. A cohort of 16 postgraduate students (master's and doctoral) has emerged from his supervision during the seven years under the NRF review. Many were disadvantaged students. On the wall in his office in the anatomy building is a large painting by a former PhD student. The topic is contentious (abortion), the colours fiery, the gesture sincere. He is held in high esteem.

And having run the race, Vaughan has some advice for aspiring young researchers: publish, publish and publish again.

Vaughan has been prolific in this arena. Three of his publications with the highest number of citations include:

The common thread is human locomotion, although each encompasses a different focus: the first addresses an applied clinical problem, the second is a book with mathematical foundations, while the third proposes a basic new theory for bipedal gait.

The first two are what the Institute for Scientific Information regard as "citation classics", while the third is approaching the threshold of 50 citations. Although each was first published over 10 years ago, there have been other related follow-up publications in the past seven years that have also garnered significant recognition.

Vaughan has not limited his scope of research. After he returned to UCT from the US in 1996, he also opened up a new avenue for research - medical imaging.

His MRC/UCT Medical Imaging Research Unit has been built on the legacy of South African Nobel prizewinner for medicine (1979), Allan MacLeod Cormack, whose pioneering research on computer tomography led to the now ubiquitous CT scanner.

Over the past four years Vaughan has recruited a young (all under 37 years), dynamic team, whose research interests and skills, he says "now reach far beyond my own".

"The A rating comes at an opportune time for me and this group as the MRC will soon be completing an audit of our unit's activities over the past four years (2000-2004) with a view to renewing our funding for another five years (2005-2010)," he added.

Having reached a pinnacle with the A rating, the question of new research frontiers elicits some reflection. With 15 years before retirement, he acknowledges the need for challenge and growth. His international academic links and contributions have taken him around the globe: China, Sweden, New Zealand, Brazil. There are many persuasive opportunities.

Yet South Africa still exerts the strongest pull. His reasons for staying are largely altruistic. On the departmental white boards are lists of papers, authors and pending publication dates. There are students to teach, ideas to be explored, funds to be raised (Vaughan helped drum up US$4.5-million for research during the past seven years).

In an interview with Vaughan after the announcement of his Walton Fellowship late in 2002, the question turned to the depth and scope of his research. Would he have put it all aside for an administrative posting as a DVC in the corridors of Bremner?

"I want to serve," he answered simply.