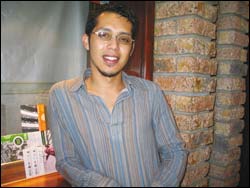 Theatrical bellwether: Ashraf Johaardien's Salaam Stories is on at the Baxter until March 27.

As a student, Ashraf Johaardien worked as an usher at the Baxter Theatre. Now, ten years later, Johaardien's life has come full circle as he returns to the theatre - this time as the playwright of the award-winning Salaam Stories.

And it is the moment just before the lights go up that the UCT alumnus will be looking forward to.

"There is this magical moment when the audience have settled in their seats, when the aroma of chocolate and aftershave fills the air and the play still belongs to you," explained Johaardien. "It is this moment that attracts me to the theatre."

It was in 1993, when Johaardien started his BA studies majoring in English and drama at UCT, that he simultaneously started working at the Baxter. He graduated with an honours degree in 1997.

When he wasn't working at the Baxter, Johaardien could be found in UCT's short-loan library.

"I spent most of my time there rather than in lectures or tutorials," he quipped.

Besides providing him with an environment conducive to much reading and writing, Johaardien points out that his stay at UCT equipped him with essential research discipline.

"I was fortunate enough to have lecturers who inspired me - Lesley Marx, John Higgins, JM Coetzee, Andre Brink, Stephen Watson - I was always negotiating with them to do things differently. It was also the options available at UCT that helped me to figure out what I was interested in and what I was drawn to."

Johaardien, who describes himself as a Jack-of-all-trades and as someone who hates being pinned down by any one thing, was also involved in the Baxter's children's theatre and educational workshops.

It is this long association with the Baxter which has made his return even more fulfilling. "To stage my play in the main theatre is phenomenal," he said. "Although it comes with a different set of expectations, it is a stamp of approval from the Baxter and it makes you feel that you have finally arrived - that your work is good enough."

And good enough it certainly is. After winning the coveted Judges Award at the Spier-PANSA Festival of New Writing, Salaam Stories was showcased in New York and enjoyed critically acclaimed seasons at several local venues, including a previously sold-out run at the Baxter. Since then, Johaardien has been flooded with requests to restage the production.

His mercurial personality is also evident in the play, which sees six actors each playing three or four different characters as they offer insights into Muslim culture.

Described as a celebration of cultural pride staged with dignity and pathos, Salaam Stories is an enchanting tapestry that effortlessly weaves story telling, humour, politics and history into compelling and entertaining theatre.

Johaardien's script tackles contemporary and often controversial issues, ranging from American imperialism to cross-cultural marriages in a series of subtle stories and hilarious monologues. The action of the play moves fluidly through multiple timeframes and landscapes to trace the origins of the Cape Muslim community from the days of slavery to modern times.

According to the 29 year-old, it is life events surrounding him, especially traumatic experiences, that inspire him to write. Salaam Stories, for instance, was written after his father died and his new play, Happy Endings Are Extra, is in response to the Sizzlers massacre.

For Johaardien, writing a play is like writing a thesis - it allows him to deliberate on a particular theme, process things and think things through.

"Writing Salaam has been a long journey, which started in June 2001. It initially served as a window into Muslim culture. Then September 11 happened and this event then pushed the issue of the global Muslim community into focus and I modified the play to reflect this.

"Now, it is more balanced. It is able to criticise the Bush administration, as well as Muslims in Cape Town and in the world. It doesn't lay blame but, without becoming a history lesson, it teaches people that they must accept responsibility for everything that happens to them and that this, in turn, makes them the authors of their own experiences."

Johaardien also emphasises the need for cathartic theatre - a theatrical experience, which fosters change and allows people to see things differently, based on what they have seen.

"There is a lot of feel-good theatre out there, but that isn't enough sometimes. We need more theatre that hits you in the gut and recognises that life is hard and things don't always work out how you planned."

In addition to churning out theatrical masterpieces, it is this successful dramatist's Gemini ability to juggle many balls at once that sees him holding down a nine-to-five job as the national co-ordinator of the writer's network - a project of the Centre for the Book, which offers information and advice to aspiring writers.

"I can't just do one thing and besides, earning a living from writing plays can't sustain you. There are many long, dry spells in between."

Well, if Johaardien continues to blaze a trail of success and be a theatrical bellwether, those long dry spells may soon be few and far between.