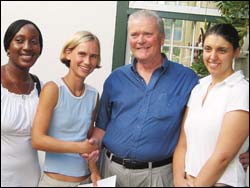 She was the guest speaker at The Association of South African Women in Science and Engineering (SAWISE) annual general meeting at Welgelegen last week.

De la Rey said that while the number of women in higher education had increased in this time, other data sets showed women had not matched this growth in research publications.

"This is an international trend, reflected even in countries like France, Sweden and Norway, where there has been equity for far longer," De la Rey noted. "We know the factors are not genetic or biological but social."

But while domestic and family responsibilities slowed married women's academic publication rates, it did not explain why "unencumbered" single women did not publish more than their married-with-children counterparts.

"This has been called the 'productivity puzzle'," De la Rey added. "The question of marital and family status is an interesting one, but the factors are more complex and require closer examination."

She discounted technical aspects as the sole reason women academics shied away from publication, citing issues of self-confidence, self-doubt and time management as the real hurdles.

Research, she added, had also showed that women tended to spend more time with their students than their male counterparts, maybe because women are seen as more approachable and nurturing. The prevailing institutional culture has possibly also played a role. Such has been the concern of the Department of Science and Technology that it has formed a special committee to examine the position of women in science and technology. De la Rey and Professor Jennifer Thomson (molecular and cell biology) are committee members.

The message certainly challenged the new postgraduate invitees who turned up in their numbers, precipitating a run on fruit juice and a welcome injunction by Thomson, the SAWISE co-founder to "just drink the wine". The AGM also heralded a new SAWISE (www.sawise.org.za) chairperson, with Professor Anusuya Chinsamy-Turan taking the helm from Thomson.

But the good news of the night belonged to Melinda Griffiths. The honours student (in cell biology in the human biology department) was announced as this year's SAWISE Angus Scholarship winner, receiving a stipend of R10 000.