OASYS will get basics right 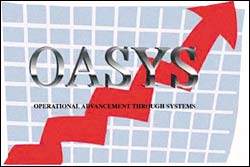 D-Day is getting closer at UCT human resources.

This comes just over a year after the department unveiled its Operational Advancement through Systems project, or OASYS. OASYS promised, as project manager Miriam Hoosain put it at the time, to "get the basics right".

That is, get its people and processes and computer software working optimally.

Which, over the past year and many (many, many) long hours has meant different things for different people at HR. Especially the many "stream leaders" (OASYS encompasses numerous "streams" or tasks).

Nuraan Allie, for one, was the "master data stream leader" responsible for cleaning up information that is recorded on SAP. This demanded that she and her team analyse thousands upon thousands of staff records, picking up errors and correcting these.

One headache for Allie and her team, for instance, was the way in which staff details were captured on SAP. While the system required uniformity in many cases (how titles had to be put into SAP, for example) information was often recorded helter-skelter.

Following the year's clean-up, updating and training, the new system - which includes a new (inter)face for SAP - will hold few such bugs, vows Allie.

Among those responsible for co-ordinating the ongoing business and SAP training of HR staff is Allie's neighbour, Gabonewe Mabalane.

Mabalane has been co-ordinating weekly sessions - remember, the entire OASYS load had to be fitted into a normal day's work - where HR staff discuss and enhance their understanding of HR policies and procedures.

A basic knowledge and consistent implementation of these policies is considered critical for HR personnel, says Mabalane.

If Allie and Mabalane were among those fretting over the information going into the system, their colleagues Verity Japhta and David Beukes (among others) agonise over what comes out of the process, that is, the many HR and organisational reports that the university has to produce. Over the past months, Japhta has been cobbling together a bird's-eye view of the organisational structures at UCT.

For one, she had to draw up a picture of how staff and jobs and positions fit into the university structure. This required, as an example, that she analyse and classify the mixed bag of UCT "manager" positions (admin managers, office managers, finance managers, et al) under one "job" description of "manager".

Nearly 120 such "jobs" - handy reporting catchalls - have been created, covering both PASS and academic staff.

Japhta was also responsible for presenting a structure of departments and organisational units (admin, research, etc), assigning codes for each unit and the 20 or so organisational "types" that were proposed and recently signed off by the registrar, Hugh Amoore.

Japhta's diagrams, organigrams and flow charts then feed into the portfolio of reports generated by Beukes. These reports, explains Beukes, are either for external use - by, say, the departments of education or labour - or for perusal and planning within the university.

These reports cover many aspects of university life, including details of appointments, CoE (Cost of Employment) administration, and employment equity information.

With the new system up and running from March 4, Beukes hopes to produce not only up-to-the-minute and very accurate reports, but also a collection of new ones that will help deans, directors and managers get a handle on the organisation and their respective units.

As with other HR staff, payroll co-ordinator Gavin Redfern also has a selection of irons in the fire.

Prominent among these is the monthly payrun, a process bedevilled in the past by errors and comebacks. Alongside SAP technicians from Swicon South Africa, Redfern has been trying to streamline the payrun.

So, for instance, they hope to cut back on the time it takes to execute the payrun. At present it takes up to 12 hours to run - Swicon believes three hours should be more than enough once the new system is in full swing.

Of interest to staff may be the new-look pay slip that comes out at the end of March, a direct spin-off of OASYS says Chupe Serote who drives the stream. The new pay slip promises to make an easier read than the current one.

Still in its signature blue, the user-friendly pay slip will not only give a rundown of payments, deductions, arrears, etc, but will initially be accompanied by an information brochure (no need for the monthly trek to the PhDs in accounting from next door then).

Arddy Mossop and her team have reviewed all HR forms in order to simplify and amalgamate where possible, as well as to align them with current HR business processes and procedures. Roadshows of the new-look forms (driven by the HR Advisors and their teams) are currently underway in the departments and faculties.

With deadlines pending, the stream leaders (we mentioned but a few) and their teams, the UCT IT and finance teams and the Swicon gurus (who have stocked a commandeered meeting room in Bremner with laptops) are putting the final touches to the new system. Which means more late hours for HR staff, who have dutifully toiled away over the past months without prospect of reward.

Hoosain believes that OASYS will, true to its word, have delivered on its promises by March 4.

"We're as ready as we can be," she noted. "We have done everything we needed to launch a new way of working and providing support to our clients.

"It's now about the new HR, and about the partnerships we have with line managers and staff."