Anatomy of a winner 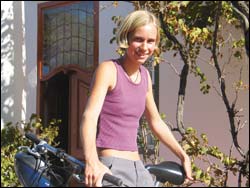 Studies surf and climbs: SAWISE Angus scholarship winner Melinda Griffiths is part of the honours cohort in the School of Biomedical Sciences.

The voice mail recording on Melinda Griffiths' cell phone is a dead giveaway. SAWISE's newest Angus Scholarship winner believes in a balanced life, wherever it takes her. It could be the ocean, the mountain or - her favourite locale - the laboratory.

"If I'm not up the mountain, I'm probably surfing or water skiing. Or I might even be at varsity," says the voice.

But leave a message. She will get back to you. The time depends on the intricacy of the lab experiments - or the wind and water conditions.

Griffiths is the fifth SAWISE Angus Scholarship winner, collecting a purse of R10 000, bounty that will financially underpin her honours studies in cell biology in the department of human biology.

The student comes from a line of academics. Her mother, Roberta, also a former UCT staffer, obtained her PhD (marine biology) at UCT. Her dad is Professor Charles Griffiths, who heads UCT's Marine Biology Research Institute.

Several years ago, Griffiths' mum named a family of seaslugs after her daughter (Lemindidae, which is a play on her name). Actually, the creatures are quite pretty, like the whorls on a taffeta ball gown.

Griffiths agrees it's not every girl who has her name forever interred in the catalogues of marine molluscs. (Younger brother Matthew, a matric pupil at Westerford, has a genus of shrimp named after him [Mathemelita].)

With a pair of bucket-toting marine biologists as parents, Griffiths grew up on the beach but was adamant she would not take up marine studies.

"I'd had enough of the wonders of the giant clam."

Schooled at Waldorf and in an eclectic range of pursuits, Griffiths spent a stint working at UCT before travelling to Wales for a gap year. From there it was on to Europe, returning to start studies at UCT at the more advanced age of 20.

Last year she graduated with a BSc in physiology and biochemistry. At first, advanced postgraduate studies seemed like a long haul.

"It seemed too much work to me, until I saw the scientists and doctors in red robes and funky hats on the platform at graduation."

Griffiths decided to be a "red person" in the future.

Though disinclined to look too far ahead, she is considering a master's in the United States, despite a British passport and possible entry into the hallowed institutions there. ("Too grey," she said of England.).

Her sights are on California, where the available sun hours will no doubt produce commensurate surf time.

Choices have always been difficult for someone with umpteen interests. After a brief introduction to psychology in first year, she was hooked.

"But although I was very interested it wasn't empirical enough. You can't really measure anything."

The next question was whether to settle in cell and molecular biology on upper campus or the School of Biomedical Sciences at medical school.

She opted for the latter and her return to the medical laboratory has been a homecoming.

While enthusiastic about the medical prospects from stem cell research, like growing new layers of skin or pancreatic cells that can be administered subcutaneously to produce insulin, she is mindful of the often uncomfortable ethical questions in the debate, particularly on stem cell harvesting from embryos.

Stem cells, even adult stem cells, can be coaxed into producing different kinds of tissues, muscle cells, nerve cells and the like, with promising prospects for people with debilitating ailments -Alzheimer's, spinal cord injuries, Parkinson's and, multiple sclerosis.

But the ethical debates are considerable.

For the moment Griffiths is part of the school's honours cohort who have been gathered for a six-week basic techniques course, where they learn the rudiments of sophisticated laboratory techniques - extracting DNA from blood cells, and the like.

She is reflective on the rather cheesy question of role models.

"It's probably my dad," she confirmed. "It's the way he handles his students. I'm awed every time he publishes a new book or I see him with his colleagues and I think, wow, he really is a hard-core scientist."

There are a few metaphorical peaks she'd like to scale in areas of her own life. Griffiths started her first company while still at school, producing marketing material for a wildlife magazine.

She's thinking of starting a biotech company one day. The product? "Something to turn off hair growth, putting an end to razors and hair removal compounds." But even 10 years down the track is too far ahead.

If the biomedical sciences have provided intellectual impetus, so has the extramural scene at UCT. Griffiths is a committee member of the Mountain and Ski Club and the Water Skiing Club. She is also listed under the Yacht Club, the Aikido Club, the Photographic Society and the Squash Club.

"I even played soccer once."

She agrees her schedule takes some managing and is glad to be naturally "quite disciplined".

"My work comes first and then I take time off to go up the mountain."

Professor Anusuya Chinsamy-Turan, new chair of SAWISE, pointed to these attributes when the scholarship was awarded.

"She's a very bright student and a very well rounded, academically-geared student who will go far."

She probably wasn't thinking of Kilimanjaro.