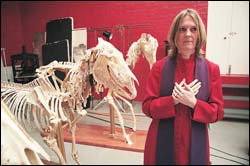 Heading north: Prof Pippa Skotnes will soon be showcasing her Lamb of God exhibit in Norway and Lithuania. This will be the first time that Skotnes' work will be on view in these countries. It will also give the artist a chance to return to her Norwegian roots.

It takes only one building to change the image of a city, says Corobrik regional winner Tshego Moiloa.

Moiloa was one of four graduates from the 2003 architecture class to collect Corobrik prizes, which reflect distinction in design resolution. Second prize went to Waheed Parker, third to David Scholtz and the fourth, the Corobrik Brick Prize, to Sadiq Toffa.

Newly graduated from UCT's School of Architecture, Planning and Geomatics, Moiloa's thought is echoed in the Cape Town station forecourt project (her thesis) that won her first prize. Next month she goes up against other regional winners for the national title as well as the global Royal Institute of British Architects (RIBA) President's Medal Student Award.

For the station forecourt design, which transforms the facility and integrates it into the city, Moiloa relied heavily on what the site needed and what impact it would have in the CBD's fabric.

"The railway station I felt was an issue on its own but instead of just problem-solving, I designed a place to showcase the diversity that exists at this site, a building that forges an identity. I designed a fragmented cultural precinct with education, entertainment, theatre and exhibition."

Architecture wasn't always her dream. Lured by the honeyed dialogue and beguilingly scripted legal arguments in programmes like The Practice, she first thought of taking up law. But direction came from her art teacher who had noted the young woman's penchant for the architectural glossies scattering the studio.

Though the Mafikeng-raised designer excelled at maths and biology, art was the subject that won her an academic award in her final year at the International School of South Africa.

"The interesting thing is that my best paintings were abstract versions of building typologies."

She was hooked. UCT was the obvious choice as her family had studied here, and though she did inspect the Wits programme, she found it less design-orientated than the one here.

Six years ago Moiloa may have considered her study choice unusual. Not any longer.

"I'm encouraged by the numbers of young black women I saw registering last week. It's still very male dominated, so yes, one has to work that much harder and be strong willed. In this country, many professionals are still 'unusual'. But some of the best architects in the world are female. Black? Well, I'm working on that – "

(In 2001 Mpho Matsipa became the first black woman to win the regional Corobrik competition.) Moiloa's half dozen years at UCT mirror a well-rounded sojourn; she played basketball for UCT and joined the Wine Society. In her postgraduate years she joined the Planning Architecture Representative Committee (PARC) where she was "into outreach". This included spells with Habitat for Humanity, international student exchange and in-house student health.

But back to black women in planning and architecture. In reworking apartheid cities, they are often attributed singular insights, a special vantage point from which to plan anew.

Moiloa agrees. "This is more so in post apartheid South Africa. Women are more intuitive and being black brings with it insight no-one else understands. One has to understand the big picture, the constructs of the city, so one can learn how to reconstruct it for today. Post apartheid South Africa is unique and this discourse hasn't yet been written. Context is very important; there are many complex networks in the city but the rich background that our own cultures bring make for interesting ideas to be tested."

What will be her biggest gift to the country?

The four winning designs presented new resolutions to some of the tough questions facing designers and planners.

"Each of these projects is grounded in topical thinking about the prospect for architecture and its potential for transforming the city of Cape Town," Associate Professor Iain Low agreed.

The old slave lodge and the parliamentary building were the focus of Parker's project, which proposed a public intervention between the two buildings and a reintroduction of access to the parliamentary precinct.

The Hout Bay community at Imizamo Yethu, a settlement recently devastated by fire, drew Scholtz's attentions. In his proposal Scholtz explored an imaginative "shopping bridge", bringing the formal and informal together and offering a generative solution to the dual economies that characterise the confrontation of rich and poor in suburban South African settings.

Toffa is the second student from a Bo-Kaap family to graduate from the UCT BArch programme. His twin brother, Tariq, graduated in 2002. According to Low, each has brought unique insights to bear on the contemporary condition of the Bo-Kaap.