Noakes makes quite a Discovery 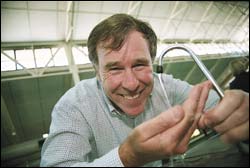 Blowing old theories out of the water: Prof Tim Noakes has made Discover magazine's list of top 100 science stories of 2003.

It's taken nigh on 20 years, but Professor Tim Noakes and associate researchers are finally getting due recognition in the US for their insistence that athletes drinking too much fluids during endurance events could be doing themselves more harm than good.

In January this year, Discover magazine listed Noakes' findings among its top 100 science stories of 2003. The century of discoveries - SARS, the shape of the cosmos and nanoparticles also make the list - represents the leading work by scientists from around the world.

Noakes earned his spot for his research on the amount of water and other fluids athletes should be imbibing before and during races.

While most American race organisers, sports scientists and sports drink producers have been pushing athletes to drink as much as possible, Noakes and local scientists have been preaching caution. They've been arguing - at conferences, sporting events and in journals - that overindulgence in fluids dilutes the body's necessary salts, leading to a condition known as hyponatraemia.

Hyponatraemia is characterised by a low concentration of sodium in the blood, and can cause anything from confusion and disorientation to seizures and, as has happened in the US, death. Research - based on 250 reported non-fatal cases and eight fatal cases between 1985 and 2002 in the US and elsewhere - by students and staff from the UCT/MRC Research Unit for Exercise Science and Sports Medicine (ESSM) persistently supported this view. Ironclad proof or not, however, their findings were regularly pooh-poohed by their American counterparts.

Until last year, that is.

In May, USA Track & Field (USATF), the American governing body for track and field, long-distance running and race walking events, announced major changes in its hydration guidelines. These new guidelines were based on the studies of Noakes and the staff and students at the ESSM, and signify a sea change in policy away from that of the American College of Sports Medicine (ACSM).

"This is a celebration of science and the fact that we can actually do good science in Africa that even the US needs to take note of," said Noakes.