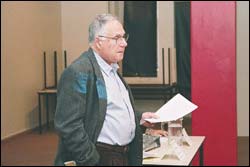 This year we start a new opinion column dedicated to your thoughts. We're inviting you to put pen to paper (1 000 words or so), voicing your opinion on any matter pertaining to life at UCT, academia or any thing else for that matter. Our pilot columnist is Emeritus Professor Yehoshua Gitay, on the occasion of his retirement as the Isidore and Theresa Cohen Chair of Hebrew and as co-director of the Centre for Rhetoric Studies. Gitay is also a Fellow of UCT.

I am the holder of two hats, which are actually two academic disciplines: Hebrew and rhetoric. Hebrew is, in fact, a wide scope of scholarship, which, given my own expertise, includes the study of the Hebrew Bible, Hebrew philology, religious studies, Jewish texts, Jewish philosophy and history, and classical and modern Hebrew literature. Indeed, it is a wide range of scholarship that maintains a number of disciplines each of which might occupy a position in itself.

Rhetoric, on the other hand, is the art of persuasion, a discipline with a long history of more than two thousand years of extensive research in the realm of the human modes of appeal. My scholarship is therefore interdisciplinary, a fact that was acknowledged by the NRF in its statement regarding my rating, presenting my scholarship in terms of breaking new dimensions in the study of the Hebrew Bible, given my ability to combine the two disciplines.

The matter of interdisciplinary study happens to be crucial at UCT. A few years ago, UCT introduced to its curriculum the concept of programmes; a revolution in teaching that did not succeed. The idea was quite positive and actually reflected the recent trend in scholarship, one that intends to be interdisciplinary. It is important to take note that one of the reasons for this failure, at least in the humanities facutly, was not, as many claimed, a matter of administration, but a lack of training of our staff in interdisciplinary study.

Now that I have reached the age of retirement, one might speculate - as many people at UCT keep asking me - what should I do? Actually, many colleagues told me "it is good to be free". My response was that throughout my eleven years of teaching here I never felt that I was in "prison", thus I was not searching for "freedom" (perhaps because my tenure at UCT was "just" eleven years). I also don't feel tired, as I enjoyed my teaching and research.

I also surprised many by indicating that, actually, I will not have free time, in spite of the fact that I have not taken membership at a golf club in the country. I still need the rich libraries attached to a university in order to continue my research and complete my scholarly projects, which do not cease to occupy me.

Let me share with you my schedule for tomorrow: waking up at 06h00, intending to continue writing an essay for a festschrift for a colleague of the Hebrew University on leadership and the power of speech in the Hebrew Bible. Together with that I must read and proofread two articles (one is on South African scholarship in the humanities and social studies where I propose a new paradigm of scholarship based on the African experience).

I also need to write two book reviews in the near future. Then I am due to publish a series of three articles on the topic of land in the Hebrew tradition, compared to the South African situation. These essays must be submitted not later than December this year.

In addition, I was asked to organise two conferences on the rhetoric of secular speech versus believers and the conditions for effective political persuasion. I am also due to chair a session on religious rhetoric and to deliver a paper at each one of these meetings, respectively. I accepted an invitation to write a book on rhetoric as a bridge between people and I am designing a volume on the Bible and reality, responding to recent political conflicts that revolve around religious matters.

I also am engaged in an NRF project regarding the rhetoric of communication between the government and laypeople regarding scientific matters (the HIV/AIDS controversy is in my mind).

Am I mad? Maybe, but I am not alone in this endeavour and many share with me this madness. The years of study, research and working long hours on scholarly manuscripts cannot stop just by chronology. Research was never considered as a "work" but a sort of a mission, which never ceases.

Never mind, there is another dimension to this sort of scholarship, which is the accumulation of knowledge and experience. This accumulation is priceless for many institutions of research and higher education. This explains the decision to cancel the "position" of retirement in the USA and in Europe next year, as well as the decision in Israel to set retirement not earlier than 68 and to include in the pension a sum of money (obviously a modest one) to encourage the retiree to continue teach and research.

Why? Are there not younger scholars who wait to fill up the vacancies? And what about minorities or women or blacks who must take their place now? Of course, they should be inside and not outside. However, many institutions understand that renowned international scholarship is the essence of universities, but such a level of scholarship, specifically in the humanities, might be reached at an advanced age and consequently must be kept.

How? Many universities ask their senior scholars to continue teaching, thus enabling the younger generation and historically unprivileged staff to reduce their teaching schedule, giving more time for research.

Obviously, the senior scholars continue to be an integral part of the institution, supporting the junior staff and sharing their experience. This is why I am teaching now at universities in Israel, making it easier for the younger generation and the unprivileged to integrate smoothly and productively into the realm of scholarship and university teaching.

Of course, one can think about another approach. One of our former deans told me that 2004 would be a better year for him than 2003 because there would be more retirees, which would help the budget. The debate is therefore about the essence of the university and the meaning of scholarship is at its heart.

Never mind, I must stop here because of the nervous e-mails from my editors and my watch, which reminds me that I need to enter the classroom shortly.