Women back in the picture 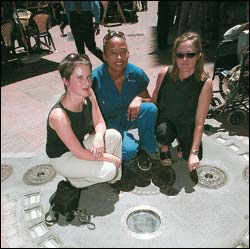 Street art: Artists Katherine Bull (left) and Fritha Langerman (right) at the opening of their Come to Pass exhibition in Cape Town with Sandra Lyons, a electrician with Metrorail and one of the 'models' for their sculpture.

Women have been relegated to the back seat in many of Cape Town's historical annals, hardly meriting a mention while their male contemporaries took centre stage.

But now artist Fritha Langerman, a senior lecturer at the Michaelis School of Fine Art, has made this oversight the theme of her new sculpture.

In 2002, Langerman and Michaelis graduate Katherine Bull were named winners of the third Cape Town public sculpture competition, presented by the Association for Visual Arts (AVA) and the JK Gross Trust.

In Come to Pass, their commissioned project that was unveiled on January 30 at the intersection of St George's Mall and Shortmarket Street - where it is cemented into the walkway - they are embedding the stories of the city's otherwise nameless women into its streets and historical tapestry.

In appearance, Come to Pass is modelled on a compass and clock (referring to time and space), and is composed of two sets of six glass and bronze discs, which intersect to form a cross. These correspond to 24 glass units (cat's eyes) that encircle the cross.

The bronze discs identify six distinct occupations that have been instrumental in the colonial evolution of the Cape cityscape (those of explorer, settler, merchant, preacher, soldier and architect) and make up one axis of the cross. On the other axis are the glass discs, which hold composite portraits of 24 women interviewed at the site on September 26 last year.

The women's names and occupations are recorded individually on the 24 cat's eyes.

The sculpture is in part, say the artists, a response to the construction of history through different models - the official record (the archive), the oral record (the anecdotal) and history as an invention (a fiction). "The structure of the city and its popular history largely reflects and valorises the exploits of men, whereas women have been elided from the city's history and the evolution of its design," they not

"This [sculpture] both memorialises the incidental and non-heroic (people who happen to be in town at a particular site, time and day) and foregrounds the role of the artists in the construction of history."

The work comes at an important juncture in the city and country's history, noted Andrew Boraine, former City of Cape Town city manager, at the opening of the exhibition.

The central city is Cape Town's own Ground Zero, said Boraine, and the site from where its citizens have to come to terms with both selective and collective memories of a city founded on 500 years of dispossession, slavery and racial discrimination.

"Come to Pass is an important part of this process," he said.