National treasure gets lifeline from lottery 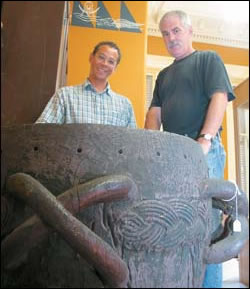 Pot of gold: Assoc Prof Franklin Larey (left) and James May with one of the larger drums in the Kirby Collection.

The musty and slightly gamey smell in room S11 is immediate. Here lies something ancient, heirlooms from a bygone era, assembled as part of the renowned Kirby Collection, a national treasure of indigenous musical instruments. Some have been delicately fashioned from hide or horn, others from gourd, wood or animal bones. News of a R2 277 860 grant from the National Lotteries to restore the 600-strong collation has come not a moment too soon.

On the SACM website the Percival R Kirby Collection is described as a "unique and irreplaceable pre-urbanisation example of the musical heritage of South Africa". It is the country's largest and most valuable collection of indigenous instruments.

These range in size and function, from a wooden drum large enough for a bathtub, to delicate Zulu ankle rattles (umfece) crafted from insects cocoons and plant material and designed for mysterious, rustling percussion, brought alive by dancers. There are Zulu friction drums (ingungu) made of ceramic and skin, and even a Tsonga sideblown trumpet (xipalapala) fashioned from an antelope horn.

Professor Percival Kirby was an internationally acclaimed historian and musicologist, regarded as a pioneer in the field of South African musicology. A Scot, he arrived on these shores in 1914. As musical organiser for the National Education Department from 1914 to 1921, he had the foresight to realise that the music of many local communities was vanishing under Western influence.

Many of the instruments have long suffered from physical degradation, said Turest-Swartz, mainly due to the lack of facilities for keeping the assemblage in a proper humidity controlled environment.

"As the central feature of the SACM's ethnomusicology archives, it is a vital resource for the continuing development of knowledge about African musical traditions," he continued. "It has the potential to become a truly 'living collection', sprouting on-going research among UCT's growing number of postgraduate researchers in African music. It also provides inspiration for a range of future research projects."

Though proper restoration and curatorship are imperative, Turest-Swartz sees the opportunity for "something more" to open the collection to wider interest, rendering it more useful and accessible for scholarly research.

"CAMA's role will be to document the entire collection using digital photography, and where appropriate, make video and sound recordings of the instruments."

The aim is to produce both printed and on-line catalogues, creating broader access to the instruments. Hopefully, one will be able to access linked video or audio examples of the sounds made or, where possible, even the music played on these instruments, many of which are very old and represent African traditions that are, in many cases, dying or already lost.

Take, for example, the lesiba, an unusual mouth-blown stringed instrument traditionally played by herdboys in the mountains of Lesotho. On a recent field trip to the area, Turest-Swartz and UCT students John Mutumba Bilay and Seboko Moopisa went in search of the now-rare lesiba. They were fortunate to find and to make video recordings of a lesiba player in the mountains above Butha-Buthe. This video will eventually be linked to the similar instruments in the collection, providing depth and meaning to the instrument in its cultural context.

The ability to "grow' a multimedia Kirby catalogue over time, linked to ongoing research in African ethnomusicology, is one that excites the team.

And, according to Larey, there are also discussions around making replicas of the instruments, so that they can be handled, played and studied.

The funding has been a long time coming. Former SACM director James May was also deeply involved "for years" in efforts to raise funds for the collection.

It can take up to seven months to get a project number (indicating the proposal has been received), two months while the distribution agencies consider it and, if the award is made, several months before the money is released. In this case, the funding request was submitted in May last year.

"This is an extraordinarily exciting moment," Larey confirmed, kneeling to examine a time-worn Zulu friction drum in room S11. "We're thrilled to be making this collection accessible to a broad audience and to very exciting research opportunities.

"All of South Africa - and the world - will see and use it."