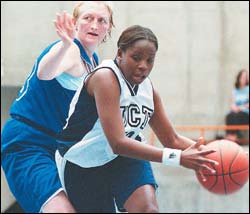 Full steam ahead: UCT's Elizabeth Sibindi negotiates her way past Laura Newitt of ISF in the sides' playoff clash.

It could be a really good year for UCT basketball.

But taking nothing away from the other teams, it has been the women's second side that's stolen the show among the UCT clubs this year. Rock bottom of their log in 2003, the squad and new coaches Qinisa "Bobby" Mbuya and Bokang Lethola have turned things around, and the side headed their log going into the playoffs. What's changed, says captain Slindile "Slee" Mayeza, is the team's focus. "This year we've been concentrating more on thinking about how we play."

That showed on Sunday, September 12. While the men's and women's first teams both suffered defeats in their matches - the first of three playoff ties - it was the second team that recorded the only UCT win on the day. They made heavy weather of it though, clearly underestimating rivals International Sports Federation (ISF). That hubris nearly cost UCT the game - it was ISF that led by one point going into the final quarter, but as their rivals flagged, UCT took control of the game and outscored ISF by 19-6 in the concluding session, winning the game comfortably by 44-32.

ISF won't catch UCT napping in the second playoff encounter, promises Mayeza. "We're going to go out hard from the word go," she says. "We won't leave things for the fourth quarter again."