German students get to grips with island bird ecology 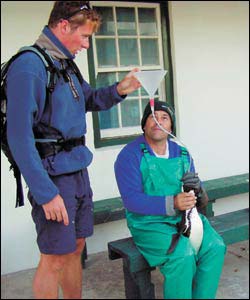 Each year, the institute sends students to a different part of the world to gain experience designing and executing research projects.

This year, after a fortuitous meeting between Jena's Dr Hans-Ulrich Peter and the Avian Demography Unit's John Cooper and Professor Les Underhill (director), the students were assigned to two of the Cape's best-known conservation islands, Robben and Dassen Islands.

There they conducted 11 mini-projects that the ADU staff and students planned beforehand. Each project had an ADU co-ordinator, to smooth over any glitches. The variety of projects kept the students busy.

One group conducted a rabbit census on the islands. According to ADU co-ordinator Dr Marienne de Villiers, European rabbits were introduced to Dassen and Robben Islands in the 1600s and this project tried to gauge the rabbit population on both land outcrops. An estimated population of 1 871 rabbits was made for Robben Island.

Another group concentrated on the type and accumulation of marine litter on the sanctuaries. As both locations are important breeding sites for various birds, litter poses problems. Several species are threatened and risk being tangled in or ingesting marine debris. On Dassen, the litter differed greatly between the two beaches: plastic packaging at House Bay and fishing debris at West Bay. On Robben Island, plastic packaging was also most common at Murray's Bay. According to De Villiers, prevailing weather conditions strongly influenced the rate of litter accumulation. "The greatest recorded was 4 860 items a day per kilometre of beach at West Bay."

A third group looked at the mussel and limpet communities on Robben Island's rocky shores. The group that conducted a game count on Robben Island was also asked to count feral cats, considered a growing nuisance and threat to some bird species. Fifty-one birds were ringed on Dassen Island, and 119 on Robben Island.

Dassen Island has been opened up for tourism and one of the findings was that tourist group sizes affect the behaviour of beach groups of penguins, with the birds showing unease sooner when approached by larger groups of people.

Another student group found differences in the diets of foraging patterns of penguins on the opposite sides of the island, and suggested that these may be due to the activities of fishing vessels, which operate permanently on the northern side.

The preliminary results of these projects were reported at an ADU seminar session. The results of the various projects have been given to the Dassen and Robben Islands' management bodies.

"At the very least they may provide the impetus for future lines of research at these important seabird breeding sites," De Villiers added.

And although the Jena team has since returned to Germany, an important link has also been forged between the two institutions.