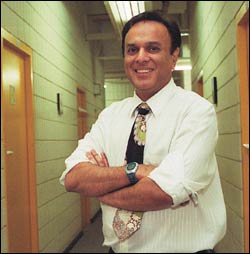 Sounding the clarion: Ashraf Mohammed has been lauded by the world's largest community service organisation for his study on TB and HIV

When Ashraf Mohammed put in an appearance at the Lions Club International- Sea Point soirÃ©e on the evening of Saturday, November 8 - an engagement he had somewhat reluctantly agreed to as Ramadan had just about started - he had planned to courteously press some flesh and then quietly and quickly slip away to end his day's fast at home.

But he dismissed all ideas of a covert flit when the club - a branch of the world's largest community service organisation - surprised him with its Louis Volks Humanitarian Award, made to him on behalf of its District 410A. The award was in recognition of Mohammed's contribution and service to the fight against tuberculosis and HIV/AIDS in the community, work that springs from his doctoral studies at UCT.

It also stemmed from a talk he had given at the organisation's conference in October, where he had spoken on The Reality of TB/HIV/ AIDS in Africa, a topic he knows plenty about. A lecturer in epidemiology, microbiology and research methodology with the Department of Health Sciences at Cape Technikon, Mohammed is - for his UCT PhD - doing a study on ways to prevent TB-infection among adults with advanced HIV-infection.

Working under the joint supervision of UCT's Professors Gary Maartens (Division of Infectious Diseases) and Rodney Ehrlich (Department of Public Health and Family Medicine), Mohammed is gauging how effective a drug called INH (Isoniazid) is in blocking tuberculosis infection, and in the development of tuberculosis among advanced HIV-positive adults. In South Africa, TB is classified as an AIDS-defining disease, meaning that if someone is HIV-positive, he or she is highly at risk of developing TB, Mohammed explained.

According to a 2000 report by the South African National Tuberculosis Association (SANTA), 40% of the 125 000 TB cases recorded in the country in 1999 were attributed to HIV infection. Other estimates suggest that South Africa now has the highest HIV-TB co-infection rate in the world, and that more than half the country's HIV-positive people (about 5.3-million people, according to the United Nations) also have TB.

Thwarting this killer disease could go a long way towards improving the quality of life of HIV-patients, Mohammed said.

For the past few years, he has been running a trial with HIV-positive adults - none of whom have TB - from clinics based at Groote Schuur, Somerset and Tygerberg hospitals, half this group (according to a random selection) administered a placebo, while the other half received INH. By comparing the two groups at the end of this study, Mohammed will be able to tell whether in fact INH has substantially managed to prevent TB among those who had received the INH.

In the run-up to the study, he and his supervisors enjoyed a research windfall when they fashioned a screening protocol to pinpoint patients who, although in the advanced stages of HIV, did not have TB. It is hoped that this protocol - a few simple tests and questions - could be rolled out to clinics in the country, as a TB screening instrument. Following on Mohammed's talk and the Louis Volks award, Lions Club has pledged its "hands-on" assistance - members volunteer their time and money - to Mohammed's work, organising workshops and other community-based projects on HIV and TB that would focus on prevention, management and control of the pandemic among those affected and infected.