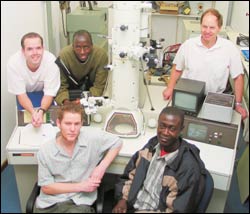 In full 3-D: (Back row, left to right) Jason van Rooyen, Robert Ndoria, Prof Trevor Sewell, and (front row, left to right) Tim Frouws and Felix Adusei-Danso are part of the UCT team to reveal the three-dimensional structure of a cyanide-degrading nitrilase.

The publication of the three-dimensional structure of a cyanide-degrading nitrilase in this month's edition of Structure represents a major milestone in structural biology in South Africa and is an important culmination of the inaugural year of the joint UCT/UWC master's programme.

The achievement comes as the first cohort of students nears the end of the first of this two-year programme, presented as a collaboration between the Western Cape tertiary institutions and initiated following a R10-million Carnegie Corporation grant last year.

There is considerable interest from the chemical industry in these nitrilases as industrial catalysts. These include the production of nicotinic acid, ibuprofen and the detoxification of cyanide waste.

This particular nitrilase degrades cyanide. Close relatives can be used to make a variety of useful compounds more efficiently and with less pollution than traditional chemical means. In South Africa, there is interest in using one of these enzymes to manufacture an antiseptic called mandelic acid and insights gained from a detailed study of the structure will certainly contribute.

"Not only is this the first three-dimensional protein structure determined on the African continent but it is an entirely new molecular architecture," said Professor Trevor Sewell, director of the Electron Microscope Unit and convenor of the structural biology master's programme.

What the group discovered (in what Sewell describes as a stroke of luck) is the first recorded instance of a defined length homo-oligomeric spiral, a spiral made up of only one type of subunit.

"Normally spirals are very long and don't have a defined number of subunits," he explained. "We now have a clear understanding of how this happens in this enzyme. Interactions across the groove formed after one turn of the spiral is completed, resulting in a decrease in the radius of the spiral at the ends and this, in turn, means that there is not enough space to add additional subunits.

"Our next step is to understand in more detail how this novel arrangement of subunits influences the enzyme activity."

Co-author Paul Meyers of the Department of Molecular and Cell Biology discovered this enzyme in 1992, but no further work was done on it until the project was taken up by Mark Berman for his master's project in structural biology. He was able to make substantial headway in understanding the complexities of the enzyme, using electron microscopy and novel methods of image reconstruction.

The work also involved cloning the gene and this was done by two collaborators at the University of Houston, Professor Michael Benedik and Dr Dakshina Jandhyala.

"The insights that have come from EM structure analysis and bioinformatics-based modelling have been truly astounding," Sewell added.

Structural biology underpins the development of key elements in biotechnology, a burgeoning area in South Africa, providing a scientific basis for the rational design of drugs (including those directed against HIV), agrichemicals and the design of enzymes for industrial purposes.

"The students have had a wonderful year meeting structural biologists from the world over and have mastered all the techniques, including X-ray crystallography, electron microscopy and NMR," Sewell said.

The programme has room for 10 students starting the master's programme next year. Successful candidates will be sponsored by the Carnegie Corporation.

For more information on the MSc in structural biology visit the website http://sbio.uct.ac.za, or contact Trevor Sewell on ext 2817 or via e-mail at sewell@uctvms.ac.za.