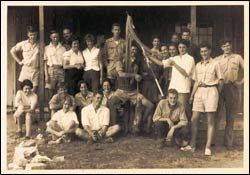 Pioneers: Early zoology students show off the catch of the day.

The zoology department celebrates its centenary this week on November 20, a milestone worthy of some celebration. But cataloguing its roots and achievements across 100 years of momentous change is a formidable task. Former head of department, Emeritus Professor Alec Brown, has written a detailed and absorbing account (with some insightful anecdotes), published in the Transactions of the Royal Society of South Africa (Vol 58(1), 2003). We have dipped into this work for glimpses of some of the department's characters and landmarks.

The department was created in the days when UCT was known as the South African College. One of the main drivers for its establishment was College Council member Paul Daniel Hahn. The first incumbent of the new Chair of Zoology (and the only member of staff) was Arthur Dendy, who began his term with one room on the old Hiddingh Campus.

Zoology was a fledgling science in these early years. All graduating bachelor's students in zoology were awarded a BA degree and it was only in 1921 that the BSc degree was instituted. Zoology's first BSc went to FC Partige in 1924. Two years later, JH Morland received the first MSc in zoology. Interestingly, the institution's first three PhDs were all in zoology.

HOD John Gilchrist, who was appointed in 1907, is remembered as the father of marine science in southern Africa, pathfinder to a list of distinguished UCT marine scientists who latterly include Professors George Branch, Charles Griffiths and John Field.

As the department grew, the university was relocated from its city locale to land provided by the Rhodes Trust. Zoology moved into a brand new building on the Groote Schuur campus, opened in 1928. At the helm of the department was the rather dashingly named Lancelot Hogben, by all accounts an irascible character whose students once rolled his car down a hill (where the RW James Building now stands) and burnt his effigy on the department's steps.

Despite this, Hogben has been remembered in the scientific arena. In 1930 collaborative work between Hogben and UCT Drs Shapiro and Zwarenstein showed that if the urine of a pregnant woman was injected into a female clawed toad, it would produce eggs within hours. The discovery formed the basis of the human pregnancy test used internationally for decades.

By the time HOD Alan Stephenson took over in 1931, it was mainly medical students who took first-year zoology. In fact, few "pure" science students went on to Zoology II.

In later years, World War II took its toll on the department. Two HODS, John Day (after whom the building took its name), were directly affected. Day took the reins in 1946 and developed marine studies at UCT. A war hero, he had lost a leg in the service of the RAF. (There is a story that tells of Day being bitten on his artificial leg by a police dog during protests against the exclusion of black students in 1972.)

Gerry Broekhuysen was another zoologist whose war experiences as a Japanese prisoner of war were brought to bear on his leadership. He said that after his internment nothing made him anxious! He had kept his sanity by studying the flower spider Thomisus and painting it using a brush made from his own hair.

Despite the move to the slopes of Devil's Peak, by the mid-1950s the department had outgrown its facilities and a new wing was built on the north end of the building.

Between 1957 and 1965, assets of a floating kind were acquired in the form of two ships. The John D Gilchrist (1958) ( the converted trawler Leeukop) and in 1965 the custom-built Thomas B Davie, were acquired for research. Sadly, these are no longer on the university's asset list.

A notable milestone was the establishment of the Percy FitzPatrick Institute of African Ornithology in 1959. It was founded by Cecily Niven in honour of her father, Sir Percy Fitz-Patrick, the only institute of its kind in the southern hemisphere.

As the department grew over time, so did its reputation for fine teachers. Alec Brown, head of department in 1975, was the first zoology staffer to earn a Distinguished Teacher Award, and one of the first trio of UCT recipients to be honoured in this way. (Brown, by the way, is passionate about music, conducted his own orchestra and while HOD he simultaneously held the Deanship of Music.)

During the 1970s and 1980s, the zoology department burgeoned, both in resources and staff, so much so that it was able to cater for the interest of individual students. As an expression of growing expertise on a number of fronts, the renowned Freshwater Research Unit was formed during this era.

1980 marked a watershed for the department when it moved into the new John Day Building. In 2002 another highlight was recorded when Jenny Day was appointed zoology's first woman HOD.