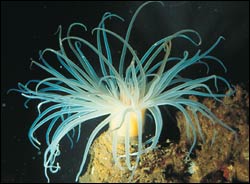 Dance in the deep: This large and elegant sea anemone, recently photographed on the Cape Peninsula, is one of the continent's numerous marine creatures that has never been scientifically described. (Photo: Charles Griffiths.)

The striking cobalt-blue crab Professor Charles Griffiths shows in a book on coral reefs is gloriously garish and quite impossible to ignore - yet the caption describes it as "undescribed species". Despite its conspicuous appearance it is one of many marine species that still await scientific discovery. Indeed researchers now think that the named sea creatures and plants are, quite literally, 'a drop in the ocean' and may represent less that 10% of the actual number of species present.

"In some ways we know more about the surface of the moon than we do about the deep sea" Griffiths added. It's a refreshing observation, accustomed as we are to cheerless scenarios of listing shrinking habitats and extinct species.

Third world regions like Africa represent a particular feast for any marine researcher looking for new species. Griffiths, who heads UCT's Marine Biology Research Institute, has also found over 100 new species, including a new genus of shrimp, Mathemelita (named after his son Matthew).

The Census of Marine Life Programme, which Griffiths recently attended in Washington DC, aims to address this gap in knowledge on a co-ordinated global scale. The census will assess and explain changes in diversity, distribution and abundance of life in the oceans, past, present and future. The programme is managed by an international Scientific Steering Committee and a secretariat at the Consortium for Oceanographic Research and Education in Washington DC. The 10-year project is expected to cost US$1-billion, and already involves over 600 scientists from 53 countries. "As such it is probably the biggest co-ordinated marine project ever attempted," Griffiths added.

At the launch of the census to the world's media, Griffiths (one of only 15 speakers) was asked to speak on unexplored oceans, a topic as deep as it is wide. "There are huge gaps in our knowledge. The graph of marine species discovered since 1750 is still in a steep incline and shows no signs of tapering off and entire groups of animals remain almost completely unknown." The conservative projection is that there are 10 times the present number of 210 000 described ocean species in the unknown realms.

As part of the global census, Griffiths also recently held a workshop involving 16 African coastal countries, which aimed to assess the state of knowledge of marine biodiversity in the waters off sub-Saharan Africa. UCT has been chosen as the African only site for both the 'historical' and 'present' arms of the Census of Marine Life Programme, the latter in collaboration with researchers at UWC and the South African Institute for Aquatic Biodiversity, Grahamstown.

But how is the census going to collect the immense amount of physical and biological information needed to achieve its ambitious aims? Clearly, new techniques must be called into play. In the census' baseline report Unknown Ocean, the talk is about harnessing marine animals like whales, sharks, tuna and albatrosses, fixed with transmitters as "vessels of convenience" to collect physical data. For example, in three years nine seals already fitted with satellite transmitters have reported 76 000 temperature profiles, as they dived hundred of metres several times a day.

Genetics also offers new identification opportunities for the anticipated flood of new species. Genetic codes will be recorded in the form of "bar codes", allowing scientists cope with the vast quantities of samples of marine life. According to the census's baseline report, only part of a cell's genetic material need be targeted for decoding.

"To be practical, a gene must be easily amplified into a quantity for analysis. It must be essential and thus present across a wide spectrum of life. And, like genes for criminal identification, it must vary enough to resolve closely related kinds of organisms, without merely differing among individuals." It continues: "The cytochrome oxidase 1 gene in the mitochondria, or powerhouse of cells, has been nominated for the barcode of marine animals."

The report notes that, thanks to technology developed for the human genome project, sequencing a cytochrome oxidase 1 gene will cost less than the jar to store a specimen and the time to label it. Once barcodes of all known species are entered into the system, identification will simply require sequencing a small sample from the specimen, or indeed a species list could be derived by sequencing an entire homogenised sample from, say, a coral reef!

Initiated in 2000, the census hopes to publish its formal report in 2010, probably in the form of an online dynamic atlas that will include not only species lists, but distribution maps and interactive keys to all known marine species.