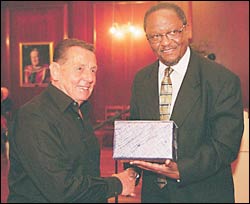 Hanging up their gloves: Retirees (Prof Francois Bonnici and Kenneth Abrahams were among those toasted by VC Prof Njabulo Ndebele (middle) at last week's retirement dinner.

This year the university says its adieus to just under 60 retirees, scholars and support staff who between them have amassed nearly 1 200 years of service.

Last week, a collection of these retirees said their ceremonial farewells at a soirÃ©e hosted by chair of Council, Tony Farr.

Among this group was paediatrician Professor Francois Bonnici, who has been with the Department of Paediatrics and Child Health and, concurrently since 1984, with the Department of Medicine's Division of Endocrinology and Diabetes for 33 years (he still only gets one salary, though, he points out). Bonnici's ties with UCT stretch back even further than 1970, however, as he first came to the university for his medical studies as an 18-year old refugee from Egypt in 1956.

Since then, his work in endocrinology and diabetes has earned him respect and acclaim in South Africa and internationally. But medicine is not all he's busied himself with at UCT over the past 47 years - Bonnici also (a feat that is often overlooked by his biographers, he says) obtained full blues in basketball as a young medical student, and later met (and wed) "the girl of my dreams" here.

His days at UCT have been happy ones, he notes. "I, like many others, have had job offers from all over the world.

"But we stay here because we want to."

Bonnici is not slowing down next year either, as he will continue his work with both UCT departments. "I don't play golf and I don't watch television, and the work that I do is emotionally and intellectually very stimulating."

The 'old man' among this year's group of seniors is Kenneth Abrahams, who, although not the oldest retiree, is the longest-serving one. Abrahams joined the UCT Bindery as a fresh-faced 16-year old in 1958, and remained with the unit throughout his stay at the university.

In addition to mastering the art of book restoration, he was founder member of the UCT Workers' Association in 1965 - he took a keen interest in members' lives beyond the workplace - and served on the executive committee of the Staff Association up until 1990. It is also rumoured that Abrahams and his younger brother, Gerald, may have had something to do with Bindery's exodus from the Leslie Social Science building to its current home at Hiddingh Campus, after lecturers griped about the duo's booming renditions of gospel and "sentimental" favourites.

Abrahams may be leaving a couple of colleagues behind at Bindery - his singing sibling as well as spiritual role model Eric Tucker, among others - but he is by no means done restoring tomes, and he has a few freelance jobs lined up. And when he's not mending books, his wife, he says, needs some manual labour in the garden.