SA ultramarathoners could be running into trouble 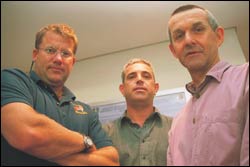 Thousands - nay, tens of thousands - are hooked on it.

Pounding pavements and off-road trails, South Africans are among the world's most avid triathletes, marathoners and - thanks to the beloved Comrades - ultra-marathoners. And bar the occasional obsessions (daily runs and heart rate monitors and GPS watches and finding the right footwear), it's all been good fun and pretty salubrious.

But now, scientists at the MRC/UCT Exercise Sports Science Medicine (ESSM) are speculating that for some endurance athletes it may - just like with Matrix movies - be a case of too much of a good thing. The researchers believe that too many ultra-marathons and ultra-triathlons and long training sessions may cause a premature aging of the muscles among some (but possibly not all) athletes.

A few years ago, sports physician Associate Professor Wayne Derman, based at the ESSM's offices in the Sports Science Institute of South Africa (SSISA) in Newlands, noticed that a growing number of worn-out runners were being referred to him by nonplussed GPs and specialists. Ricocheting from doctor to doctor, the patients were predominantly ultra-distance athletes who had years' of training and racing under the belt, and ranged in age from 24 to the not-that-old.

The most frequent complaint from the athletes was that they couldn't run as fast or train as hard as they were accustomed to. Many also reported excessive muscle soreness and fatigue.

Derman initially put these aches down to the normal aging process, but the sudden onset of symptoms made him believe that something else was afoot. "The decline that was observed or reported," noted the ESSM's Dr Malcolm Collins, "was faster than could be explained by natural aging."

A case study by Associate Professor Alan St Clair Gibson on one 24-year old former international runner had also shown that the mitochondria (small intracellular organelles responsible for energy production and cellular respiration) in the athlete's thigh muscles were abnormally shaped. "If you have abnormal mitochondria, you could speculate that they weren't functioning properly, and therefore the muscle wouldn't function properly," explained Collins.

For all appearances, the athlete's muscles had aged prematurely, added Collins' colleague, Associate Professor Michael Lambert. "He had a lot of characteristics in his muscle that were similar to the characteristics that you get when you're very old," noted Lambert.

Further biopsies indicated clearly that the mitochondria in the athlete's upper arm were doing just fine. "So we knew that we were looking at a local effect," noted Collins, "and that it wasn't a general problem, and that only the muscles that were being recruited in running were the ones affected."

That seminal work by St Clair Gibson then led to broader research by doctoral student Liesl Grobler (she graduates in December), who confirmed the initial findings when she compared a number of those grieved by the ailment with a symptom-free control group. Grobler's afflicted group was predominated by endurance athletes (runners and cyclists), although it did include one squash player who admitted to long training runs.

Grobler showed that there was a higher incidence of muscle pathology among the ailing athletes. More revealingly, she found that these athletes also "suffered" from excessive muscle regeneration. "When you exercise, you incur to a lesser or greater extent some form of muscle damage," Collins explained. "That damage is normal - under normal conditions - and is part of the adaptation process taking place, and part of your muscles getting stronger."

But there's a line - albeit a thin one - between damage that leads to such positive adaptation and damage that is more ominous.

Following on Grobler's work, Collins then did a study of his own that suggested that some athletes may be using up their finite stash of healer cells known as satellite cells. Cached within muscle cells, satellite cells repair and regenerate the damaged muscle cells after exercise.

"The problem is," said Collins, " that there may be only a limited number of these satellite cells, and they may only be able to go through a limited number of cell divisions in a life span. "Damaged muscle can therefore not be indefinitely repaired."

Those who exercise more modestly than endurance athletes are unlikely to exhaust their supply of satellite cells, said Collins. Some - again, not all - ultra-distance athletes may not be so lucky. By measuring the length of the telomere - a specialised structure or sequence at the end of a human chromosome - scientists can also count the number of times satellite cells have divided (to repair damaged cells), and how many satellite cells are left in the muscle. The shorter this telomeric sequence, the more divisions the cells have gone through.

"We found that the telomeric sequences in athletes with this condition were significantly shorter than those of the control athletes," said Collins. "The increased incidence of muscle damage and the shortened telomere lengths together suggest increased muscle regeneration, and that the ability to repair muscle damage is coming to an end."

The aim of the research is not to spook people away from exercise or from taking part in marathons and other such events, Lambert emphasised. In fact, the work done at the ESSM and the SSISA is actually geared to encourage people to exercise, he added.

"We are however seeing that for some people who do too much exercise, there can be consequences."

The condition does pose a spray of intellectual teasers for researchers. "If we can see who's vulnerable and who's not, it can teach us a lot about exercise and adaptability and a number of other issues."

It could also aid physicians in finding a suitable treatment for the disorder. "In years to come - and I wouldn't like to put a time frame to it - we would like to be able to tell athletes whether they're at risk or not," said Lambert.

While getting to grips with the condition, the researchers are also at work coining a catchy name and acronym for it. They christened it the Fatigued Athlete Myopathic Syndrome, or FAMS, in a paper published in Medicine & Science in Sports & Exercise, the official journal of the American College of Sports Medicine (see www.acsm-msse.org) in September.

Whatever they decide on, the researchers are in a position to give athletes some peace of mind. "People went from doctor to doctor without getting any real answers, and they wanted to know what's wrong with them," noted Collins.

"We don't understand the whole story yet, but at least now we can say to them, 'We know there's something wrong with your muscle; it's not all in your mind'."