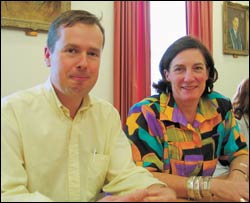 The days of women suffering from premenstrual syndrome (PMS) and shouldering the responsibility of contraception may be a thing of the past if two studies in UCT's department of obstetrics and gynaecology are anything to go by.

With its head office based in Edinburgh and funded by the Department for International Development in the United Kingdom and the Medical Research Council (UK), the Network has centres in Shanghai, Hong Kong and Sagamu (Nigeria).

Although a number of projects have already been completed in this collaborative network, the present studies represent a further development in both male and female contraception.

The first study investigates the use of a non-oestrogen containing pill and compares it directly with the progesterone-only pill, which is the usual choice for women wishing to use a non-oestrogen pill. The use of an anti-progesterone hormone makes the lining of the uterus unfavourable for pregnancy while also preventing ovulation.

"We want a pill that is effective, that eliminates the side effects of oestrogen and then allows women not to have periods," explained Van der Spuy. "This will be a phenomenal advancement for female contraception."

"Volunteers should not have used hormonal contraceptives for at least three months, should not be breastfeeding and should have no medical conditions such as diabetes or high blood pressure," she added. The second study compares different hormonal treatment regimens for contraception in healthy men. Previous work within the network has demonstrated the efficacy of a combination of testosterone and progestagen as a contraceptive agent in men.

In this study, which requires 30 male volunteers and runs over a year, the sperm count is monitored to assess the effectiveness of the treatment.

A progestagen implant, no bigger than a matchstick, is inserted under the skin of a volunteer's upper arm. This implant is responsible for the suppression of the function of the testes.

A second implant of testosterone (about the size of a rice grain), is inserted under the skin of the stomach and is responsible for replacing this hormone.

According to Dr Richard Anderson, an obstetrician gynaecologist who works in the network in Edinburgh and who visited Cape Town to audit the practice, this form of contraception has modest side effects and sexual function remains normal.

"The process is completely reversible, meaning the implants can be removed and fertility will return to normal after a couple of months."

Already two suitable volunteers are taking part in the study. Van der Spuy and her colleagues are looking for healthy men between the ages of 18 and 45 years who would be required to visit the team every six weeks to have blood taken and produce a sperm sample.

In response to a journalist enquiring about the remuneration (or other benefits) received by male volunteers taking part in the study, Van der Spuy quipped: "They receive a warm glow. They are truly contributing to the future of contraception."