Cellphone technology comes to the aid of Peninsula's baboons 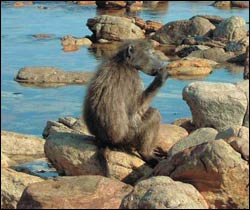 A baboon sighting may be the highlight of many a tourist's experience of a visit to Cape Point, but the primates find considerably less favour with local residents who often feel under siege in their own homes.

This is why UCT's zoology department will be overseeing several research projects on the effects of humans on the behaviour and ecology of the remaining 10 baboon troops living on the urban fringes in the South Peninsula.

Social mammal expert Dr Justin O'Riain explains: "With the continued development of greater Cape Town, and new suburbs mushrooming, the remaining endemic mammal species are being squeezed into ever smaller pockets of undeveloped land. Baboons are simply not taking these land grabs lying down and have an active hand in making house owners pay a 'food levy' for the privilege of living in 'beautiful mountain/fynbos areas'."

Hence the focus on the baboon problem, a research area ripe for the proverbial picking.

Because male baboons pose the biggest threat, they are also the most persecuted when they interact with humans, with many a dispersing male succumbing to a bullet or poison. The effect of this is that the local baboon population has a strongly skewed sex ratio in favour of females.

Just how this impacts on their reproduction, behaviour and physiology will form one of the main thrusts of the research and together with detailed information of raiding behaviour will form the basis of Angela van Doorn's PhD thesis.

One of the early results of this work, which was initiated in January 2003, is that it would appear that neighbouring troops bury the territorial 'us-and-them hatchet' when it comes to raiding and form a united and more successful front when taking on Homo sapiens.

Raiding means that baboons have a chance to savour "refined, carbohydrate-rich foods" which they, like us, seem to prefer over more wholesome, fibre-laden vegetable matter. This raises the question of what effect such foodstuffs are having on their health and body condition.

Master's student Esme Beamish has the task of assessing how this dietary departure from the norm is affecting their health and will be looking at cholesterol levels, prevalence of diabetes, obesity and a range of illnesses that are synonymous with our "refined" western diet.

To date, dispersing males have received the most publicity from the city's papers. Males disperse from their natal troop to avoid inbreeding and are thus behaving normally when they look for new troops to link up with. Unfortunately, because they range over large distances, they frequently encounter trouble, leading to running (and often highly publicised) chases through the suburbs of areas like Tokai, Hout Bay or even Bishop's Court.

To better understand the transfer of males between troops, five "likely disperser" male baboons are to be fitted with GPS collars, which will enable researchers to establish exactly where they are at any given time, using technology similar to, although a bit more accurate, that deployed for the famed Pamela, Peter and Percy penguin-tracking saga following the Treasure oil spill.

But the new baboon collars, funded by the National Research Foundation (NRF), have an added advantage in that they can now be tracked by cellphone, via a computer database accessed through Bloemfontein. Thus a tracker will be able to key in an SMS to find out where the collared baboon is, and be sent back the exact co-ordinates.

David Gaynor and Ruth Kansky, who have done much of the baseline observation of baboons in the Peninsula, are intimately involved with these research endeavours and their knowledge and experience are proving invaluable.

Ultimately, the baboon studies might also have some telling observations to make about ourselves who share all the traits of bad behaviour our peri-urban cousins are beginning to demonstrate.