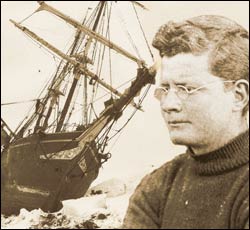 There is a photograph in Caroline Alexander's book on Ernest Shackleton's epic but doomed Antarctic expedition aboard the Endurance showing RW James crouched on the ice at night, swathed in Balaclava and woollens with a telescope. Ship surgeon Dr Alexander Macklin wrote in his diary: " – by getting the exact moment of occultation of certain stars, they were able to work out the exact time."

In the background the wooden, ice clad ship lists, pressured between slabs of gathering pack ice at latitude 74 o south in the Weddell Sea, waters that would claim the shattered ship (November 21, 1915), leaving the expedition marooned on the ice before they eventually launched three lifeboats for Elephant Island on April 9, 1916. Shackleton had been pursuing one of the last distinctions in polar exploration: traversing the Antarctic on foot.

Physics department's Lesley Jennings believes that without the expertise of the future UCT Professor of Physics and Acting Principal, Reginald "Jimmy" James, Shackleton's ill-fated party may never have set foot on land again.

At the request of the James family, Jennings has spent two years reworking RW James' polar diary into a modern format. Last week, a time-shrouded piece of UCT's history was brought to light again when Emeritus Professor John Juritz presented copies of the diary, newly typeset and bound in blue, to the three James children, John, David ("Viv") and Margaret.

Macklin's polar diary describes the Cambridge-trained magnetician and physicist thus: "James was physicist, and was engaged in working magnetic observations, occultations of stars – He had some wonderful electrical machines which none of us understood, and a joke of ours that annoyed him very much, was that he did not either."

In her evocative book on Shackleton's expedition, Alexander's portrait of RW James sketches a reticent man but an emerging scientist of some brilliance, one whose UCT physics classes would yield at least two great minds: Nobel laureates Professor Allan Cormack and Sir Aaron Klug.

Alexander writes: "Jimmy James, earnest and reserved, was the stereotypical academic, brilliant and engaged in his field, somewhat baffled and inept in everything outside of it. The son of a London umbrella maker, James had led a sheltered academic life. He had given up a desirable university appointment to come south (his ice-block physics lab was called the 'physloo' by the sailors). James was a good conversationalist, talking excitedly about such issues as vaporisation, pressure of gases, and atmospheric phenomena - often baited by Greenstreet and Hudson, whose facetious questions would eventually silence him. Unexpectedly, he proved to be one of the best actors in the farcical skits that were a mainstay of ship entertainment."

After drifting on ice floes for months, Shackleton's party eventually took to the sea in three lifeboats, headed for the starkly inhospitable Elephant Island. Then, during a perilous voyage aboard the lifeboat James Caird, Shackleton and five handpicked men made for the whaling station on South Georgia Island. The remaining party was eventually rescued by a Chilean tug, the Yelcho. Not a single man died, and Shackleton's inspirational leadership became embedded in history.

In 1937, James immigrated to South Africa where he took up the Chair of Physics at UCT. He made his mark on the university with his reputation as "one of the best lecturers" and for his worldwide reputation in X-ray crystallography. And when Vice-Chancellor and Principal TB Davie died suddenly, James was appointed Acting Principal, speaking out against the 1957 Extension of University Education Act and arguing for the right to admit black students.

James retired as Professor of Physics in 1956 and gave up the post of Acting Principal the following year. After a break, he returned to academia from 1958 to 1963, back to the physics department on a part-time basis. He died in 1964, aged 73.

Jennings, who had worked under James' "watchful eye" (there is a photograph of him in her office) since 1970, was familiar with the legend of a man "whose influence is still keenly felt by those who knew and loved him".

In 2001 registrar Hugh Amoore referred Jennings to Peter Wordie, a Scottish historian who wished to make contact with James' descendants. His father, James ("Jock") Wordie (later Sir James Wordie, Master of St John's College, Cambridge) and RW James had been companions during the expedition and had enjoyed a lifelong friendship.

"The meeting of Peter Wordie and the next generation of Jameses was, by all accounts, memorable," Jennings recalled. "Wordie brought, inter alia, a lifetime of correspondence which his father had received from RWJ."

When John James asked Jennings if she could recommend someone to tackle his father's deteriorating and brittle polar diary, she leapt at the chance. "I didn't work from the original diary, most of which Professor James had donated to the Scott Polar Research Institute in Cambridge, but from a copy of the typescript which had been produced in England shortly after the event and sent to the author."

Of the remaining original portion, it was with some awe that she held "the blackened treasure that had survived two years of the most gruelling conditions". "I was gripped not only by the content, but by the visualisation of the conditions under which it was written."

"RWJ's account inevitably tended towards his discipline as a physicist, and he found himself in the vital role of position-finder, especially once they had abandoned ship and were stranded on the ice. Indeed, without his expertise I believe they might never have set foot on land again."

Two things struck Jennings: his consistent and controlled reporting in "unbelievably uncomfortable conditions" and characteristic gentlemanly tolerance and understatement in times of particular stress. "Throughout, there was an underlying reverence for Sir Ernest Shackleton - the man and the leader - which RWJ put into words years later (1942) in a talk to the Philosophical Club in Cape Town: 'A baffling man in many ways: a strange mixture of generosity and caution; a poet at heart, and probably always his own worst enemy. He had many faults, but in a tight corner all looked to him, and all the best men who served with him became his devoted adherents, and would have done anything and gone anywhere with him'."

(A copy of the diary will be housed in the WE Frahn (Physics) Library.)