New process could save millions for South African chemical industry 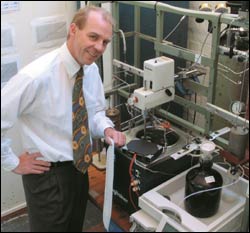 The South African chemicals industry accounted for R95.8-billion in 2000. Thymol, an ingredient in the manufacture of menthol, is a small portion of this with a world market of around 4 500 tons a year. However, research by UCT's chemical engineers has pioneered a way of reducing the cost of producing thymol by nearly one third, with the potential to add R90-million to South Africa's chemicals industry every year.

"Thymol is essentially a low-volume, high-value 'speciality chemical'," said Professor Jack Fletcher from the Faculty of Engineering and the Built Environment's Catalysis Research Unit. "Its main use is as a precursor to menthol, which is in demand in the flavour and fragrance industries."

As the production of thymol has left a "negative environmental footprint", Fletcher and his postgraduate research team have been investigating ways of producing thymol more efficiently from a domestic feedstock stream. This produces fewer by-products and has less impact on the environment. The process also offers cost advantages.

The research is the result of a request from the BioChemtek division of the CSIR, in response to a query from AECI, the industrial partner. The Catalysis Research Unit has over 20 years' experience in the field of zeolite catalysed chemical synthesis, and was thus the natural choice of subcontractor for the research, said Fletcher.

"The result has been a collaborative venture with each party contributing from its own area of expertise." Completed in just 12 months, the project resulted in a new principal conversion process and an optional secondary process for maximum thymol yield.

According to Flecher, the principal synthesis step involves converting meta-cresol and propene over a zeolite catalyst. "Zeolites are an important class of catalysts. They contain pores of similar size to the molecules involved in the chemical transformations. This allows for selective reactions, since only reactants that can enter the pore can react, only reactions whose transitional states fit into the pore can take place, and only products that are able to diffuse out of the pore will be detected in the products of the process," he explained.

Fletcher names selectivity as the key descriptor of a catalytic chemical process. "Ideally, you want the selectivity to be 100%. When you achieve this, it means you are producing only the desired product, without any waste. By treating the external surfaces of the catalytic zeolites with silane compounds, we are able to limit the reactions happening outside the zeolite pores and achieve significantly higher selectivity."