"Keep what is excellent and shelve what is bad" 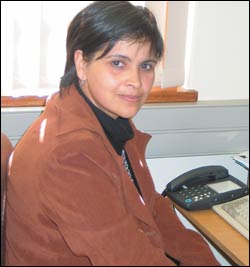 Ringing the changes: UCT alumnus Nazeema Mohamed is the transformation manager in the office of the Vice-Chancellor.

Her title is a bit of a mouthful, and one that you'd "only find in this country", says UCT's new transformation manager, Nazeema Mohamed. Nevertheless, it's something she's passionate about.

Appointed earlier this year, Mohamed, whose activist roots go back to the United Democratic Front, has to monitor, co-ordinate, report on and give advice about transformation at UCT.

Her assignment is based on the strategic outlines devised at Saldanha by the Senior Leadership Group (SLG).

Mohamed says she has always felt very strongly about creating the enabling conditions for change. Transformation, however, cannot be laid at the door of only one office.

One of the key decisions made by the SLG was that transformation would become a line management responsibility, making it the responsibility of each and every manager at UCT.

Thus, Mohamed sees her role as being one in which she is able to offer information, support, and advice on transformation while simultaneously monitoring progress.

She also has the responsibility of being the servicing officer for the Institutional Forum, the only body to represent all stakeholders, including representatives of management, the Council, Senate, staff and students.

The Institutional Forum is a statutory advisory forum to the Council with regard to the implementation of the Higher Education Act. Its area of influence ranges from race and gender equity, to codes of conduct, mediation of dispute resolutions, to the fostering of a culture of tolerance and nurturing the environment of teaching and learning.

The Institutional Forum meets about six times a year, and has three chairs representing management, students and staff, respectively. This year they were Vicky Scholtz with the Employees Union, outgoing SRC member OG Masisi, and Deputy Vice-Chancellor Professor Cheryl de la Rey. Together they determine the agenda for each meeting.

Here in South Africa, she cut her political teeth during a teacher's strike in Mitchell's Plain in 1987, which saw her barred from teaching. She was also involved with the SA Youth Congress where she was the gender convenor.

Among the formative experiences she associates with UCT was her involvement in the Community Education Resources Programme with the Department of African Studies where she enrolled for an honours degree. After political change came to South Africa in the early 1990s, she became closely involved in drafting higher education policy through the Education Policy Unit at the University of the Western Cape.

In 1996, she worked for the Centre for Education Policy Development, a think tank set up by the government to work on policy, and to support the parliamentary study group drafting legislation on education.

After completing a master's in Higher Education Management, focusing on gender issues in the UK, she returned to South Africa as a consultant, then worked for two years as Director of Higher Education Policy Development Support in the Higher Education Branch at the Department of Education in Pretoria, before a family crisis brought her back to the Cape, and, ultimately, to UCT.

"Throughout this period in my life, I have always taken on the fight for inserting key transformation issues, particularly around equity concerns generally (such as disability, location and class), into policy frameworks," she said.

She believes that UCT is an excellent institution, rated as one of the best in the country, but also one that needs to accelerate its transformation.

"This makes the challenge of transforming UCT greater - why change what works? I believe constructive transformation is the intention here. That is being able to retain what is excellent and shelve what is bad."

Among the areas that need urgent attention, in her view, is supporting and retaining black students and staff.

"We also need to ensure that UCT as an institution responds to local and national needs in a way that addresses the public good, namely providing the human resources and research for addressing social, political and economic development."