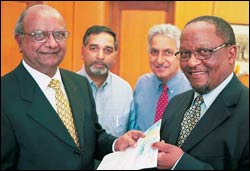 The Hospital Welfare and Muslim Education Movement (HWMEM), which has aided UCT students via an interest-free loan fund since the mid-1960s, recently handed over the latest of its annual contributions to the university.

The organisation, celebrating its sixtieth anniversary this year, presented a cheque of R122 000 to the Vice-Chancellor, Professor Njabulo Ndebele, in early October, the money going towards the HWMEM loan scheme. Ndebele met with the Movement's Noor Ebrahim Bawa, Sharief Hassan and Mohammed Omar - a UCT staff member - at the handover.

Between 30 and 40 students benefit from the organisation's generosity each year. Although there is no pressure on students to repay the money, they are encouraged to reimburse the fund - sans interest on the loan - when they are able.

This money is then reinvested in the fund to support a new group of students.