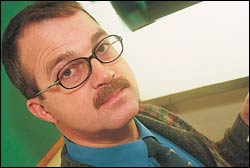 Protector of the children: Dr Sebastian Van As who advocates that firearms should be strongly discouraged by doctors as a health risk.

The Child Accident Prevention Foundation of Southern Africa (CAPFSA) estimates that more than ten children under the age of 18 die every day in South Africa due to injuries related to road accidents, drowning, burns, poisoning, falls, choking and suffocation, and that hundreds of thousands of children are left injured or permanently disabled every year due to these unnatural causes, writes NICOLE CHIDRAWI.

Celebrating 25 years of child accident prevention in South Africa, CAPFSA, in conjunction with UCT, held an international conference entitled Towards a Child Safe South Africa at The Colleges of Medicine of South Africa from October 15 -17. Monday Paper features an overview of some of the papers presented and issues discussed at the conference.

CAPFSA had its origin in the Child Safety Centre, which was established under the leadership of UCT's Emeritus Professor Sid Cywes.

Concerned with the growing numbers of intentional and non-intentional injuries among children, the centre aimed to prevent accidental deaths, injuries, disabilities and suffering among children in South Africa.

According to Professor Heinz Rode, head of UCT's division of paediatric surgery, it became apparent in 1987 that the knowledge and skills acquired and used by the Child Safety Centre on a local level were also needed nationally.

"CAPFSA was established in April 1987 with the aim of promoting the optimal health and development of all children in our country through research, education, environmental changes and legislation. "To achieve this we work in co-operation with government, industry, non-governmental and community based organisations, community groups and individuals."

Believing that every child has the right to grow and flourish in a safe environment without the threat of being hurt and that most accidents can be predicted and prevented, CAPFSA has joined forces with other countries that regard preventative education as the best way to combat childhood injuries. "The foundation has grown remarkably, both in structure and function, through research, health promotion and community programmes," said Rode. "Today, it shapes prevention policies and practices and has achieved impressive results."

Guns - a health risk to children

Approximately 2 000 children are killed by firearms each year in South Africa. Fifty six percent of the 30 000 murders occurring each year in our country are now due to gunshots. Firearms are also the cause of 22 000 attempted murders each year.

These statistics were presented by Dr Sebastian van As, head of the Red Cross Children's Hospital's trauma unit, in his paper entitled Guns and Children.

According to Van As, 278 children were treated for gunshot wounds at the hospital between 1992 and 2000.

"Nearly 50% of these children would have been shot outside their own homes and the circumstances of the shootings would have included being shot deliberately by an adult, playing with a gun, being shot by gangsters or by another child or friend as well as being caught in the crossfire during a taxi war."

Based on the fact that most legal firearms that are stolen or lost end up being used for illegal purposes, Van As questioned whether personal firearms increased safety.

"Studies in South Africa show that 84% of violent crimes involve firearms. Of people in possession of a firearm for self-defence, only 8% had them at the time of the attack. These people are also four times more likely to have their firearm stolen before they can use it."

Van As had harsh words when it came to television and video games, which contained violence, the leading cause of childhood death.

"In the USA the average child watches 200 000 acts of television violence before the age of 18. "Firearms are not only dangerous, but also threaten every individual's right to life. They should be strongly discouraged by doctors as a health risk," he said.

After motor vehicle accidents, head injuries inflicted during abuse are likely to be the most common cause of childhood head injuries.

In an attempt to perform an audit of inflicted head injuries in children, with a particular focus on the mechanism of injury, Dr Graham Fieggen, a consultant to UCT's division of paediatric surgery, and his colleagues embarked on a three-year retrospective study at the Red Cross Children's Hospital. "The study was performed on all children presenting to the trauma unit of the hospital with a history of non-accidental head injuries," Fieggen explained. "The folders of 75 children presenting between June 1998 and June 2001 were reviewed.

"Forty four percent of the children were under one year of age, 33% were between one and three and 23% were older than three years."

The results showed that two children were assaulted more than once and that the majority of assaults were performed by men (88%).

According to Fieggen, a large number of children appear to be injured as part of shielding and says it would be worthwhile to investigate the phenomenon more closely.

"We need to question whether the child was accidentally injured or actively used as a shield during the attack. While the 'battered child syndrome' and the 'shaken baby syndrome' are well known entities in childhood trauma, it seems worthwhile giving attention to the 'shielding phenomenon' in view of preventative measures."

The language of sexual violence

Research into the linguistic and rhetorical strategies used in speaking about sexual violence and investigating how these exacerbate the problem, was presented by Helen Moffett from UCT's African Gender Institute.

Moffett said that when speaking about rape or abuse the rapist is either erased from the picture (we hear that "a child was raped" but never that "a man raped a child") or that the rapist is demonised as a monster, someone who is "other" or outside the bounds of our families and communities.

"This presents serious problems when practitioners, activists, the media and policymakers try to address the scourge of child rape. If there is one thing that might garner a general consensus, it is the notion that anyone who rapes a child is by definition a monster.

"But this is at odds with the one fact we know about those who rape children - they are almost always known by their victims and are often very close to them. The rape of children is by definition intra-communal and therefore a narrative about 'insiders' and not 'outsiders'."

In the absence of a "monster" one response is to find others to blame, including drugs, alcohol, poverty, superstition and AIDS, said Moffett.

"I argue for rhetorical responses that do not further victimise rape survivors, women, children and those with HIV/AIDS, and that hold perpetrators responsible."

Are infants able to remember trauma?

This was the question asked and the title of Dr Astrid Berg's presentation to CAPFSA conference delegates.

Berg, from UCT's Parent-Infant Mental Health Service, said that because infants cannot speak, it is generally presumed that they do not know and will not remember trauma.

"But research has shown that infants' abilities to discriminate, recognise and remember various sensory stimuli are far more sophisticated than has been assumed."

According to Berg, post-traumatic stress disorder is a diagnosis that can be made during the first three years of a child's life. Its expression, however, is dependent on the infant's developmental stage.

"This, together with the way in which the trauma impacts on the family, must be taken into account when treating post-traumatic stress disorder in this age group."

The re-experiencing of the traumatic event takes place in many forms during early childhood and usually manifests as disturbed behaviour.

For Berg, an important aspect of therapeutic intervention is to enable the caregiver to put into words what the infant or toddler is acting-out and to link it to the traumatic event. "A verbal narrative helps children make sense of their experience and is a major factor in facilitating healing."

The Children's Bill is about to be tabled in Parliament and will replace the 1983 Child Care Act, which is the legislation concerned with the formal child protection system.

Initially developed by the SA Law Reform Commission (SALRC) over a period of six years, the Bill was at first welcomed by those in the children's sector as an innovation that would ensure a reduction in the high rate of child abuse in South Africa.

But Paula Proudlock from UCT's Institute of Child Health said: "Over the past few months the Bill has been severely diluted by the Department of Social Development and Cabinet and the version that is about to be tabled in Parliament is a very pale shadow of its former self."

Presenting her paper at the conference, Proudlock outlined the range of preventative measures that were proposed in the SALRC version of the Bill and called for their re-insertion into the Bill. One of these included a comprehensive social security system that would ensure that families could provide for their children's basic needs and ensure their protection.

More than 1 100 children under the age of 19 die on South Africa's roads each year, 41% of whom are pedestrians.

At a meeting in September 2000, the Global Road Safety Partnership, under the auspices of the World Bank, chose Drive Alive's Pedestrian Visibility Campaign as its number one priority project.

Agnes Elliot from Drive Alive said that the campaign's objectives were to educate the public on road safety, to advocate for legislation making it compulsory for all school uniforms to be reflectorised to increase pedestrian visibility, and to increase signage on public roads.

Many of the children chosen to take part in the project, which included poster, television and school awareness campaigns, lived in informal settlements on one side of the Golden Highway and the N12 in Johannesburg and had to cross the highway daily on their way to school.

"It was found that not only were the children visible on the roads and so much safer, but that road safety had become a major priority for them," said Elliot.